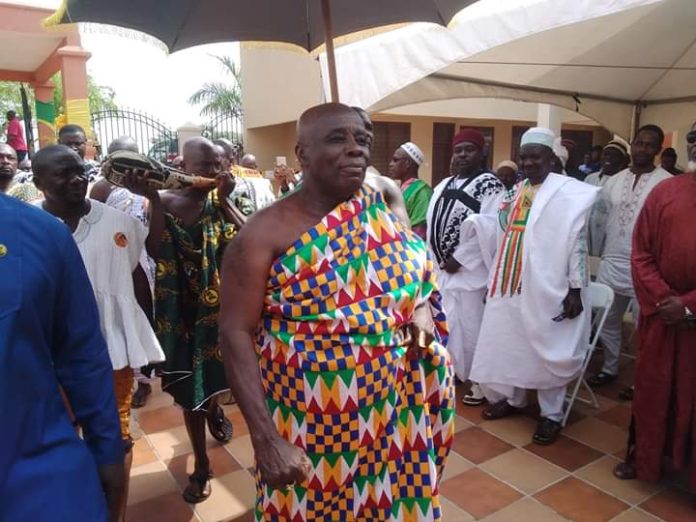 The Okyenhene Osagyefuo Amoatia Ofori Panin says the Akufo-Addo government is committed to building peace in the country.

The Overlord of Akyem Abuakwa speaking during a courtesy call on him by the National Chief Imam Shiek Osmanu Nuhu Shaributu and his entourage at the Ofori Panin Fie in Kyebi on Monday, called on the youth of Ghana to believe in leadership and Peace.

“So I want to support chief Imam and the young people who came here that we cannot grow as a nation if we don’t begin to believe in peace. Peace cannot be defined only by conflict. Ghana is not at war but we talk about peace. Peace is employment, peace is education, peace is being able to live with a brother without having to attack them, peace is when you have development in the country, and I think that is what our great President -Nana Addo Dankwah Akufo Addo is intended to do”.

According to the Okyenhene “leadership is challenging. Everywhere you are giving the mantle to lead the people, you will face obstacles and challenges. It takes a good leader to maintain peace. You may have to bring changes in the lives of the people and to bring a change in the lives of the people is not for the faint-hearted, neither is it for those who are unwilling to make hard choices. In leadership, one has to make hard choices as any idea of significant change will attract people who may not like it, in other words, it may attract opposition and may also attract people following you. It is good leadership that can bring both parties together in pursuit of peace”.

Okyenhene Osagyefo Amoatia Ofori Panin, who is celebrating 20 years anniversary on the Ofori Panin Stool, used the feat of Okyeman in both traditional and national Politics to cite the example of the relevance of striving for success.

“Because we believed in leadership and God, those who said it could not be done, I can just tell you look at us now, every time I stand up I say what a mighty God we serve. We serve a God that has created a grandfather, who had three sons, One President One Okyenhene and One Finance Minister. What a mighty God we serve! All on this land in this time”

Okyenhene eulogised National Chief Imam for his distinguished leadership that has enhanced religious harmony in the country.

” We want to join the Chief Imam and his Zongo elegant chiefs to tell young people in this country that whatever happens in the past they should put away, wherever you live should not be an issue, every time remember that we want people and us leaders should make sure hope is reborn and that we have to establish pride among Ghanaians, and help each other, support each other and lead in humility, once you did that the rest will be in the hands of God”

He added, “It is important for us in Ghana to understand that you may speak a different language, we may dress differently, we may eat different food, we may worship different Lords, but let it not be lost on anyone that we carry a common denominator- the bloodline that flows through every individual is Ghana”.

The National Chief Imam who spoke through his Spokesperson, Ahaji Baba Issah, explained that the visit was to celebrate the success of Okyenhene and to introduce two liaison officers his office has appointed to the Office of the Inspector General of Police security matter in the Zongo Communities as part of measures to maintain peace before, during and after the 2020 polls.