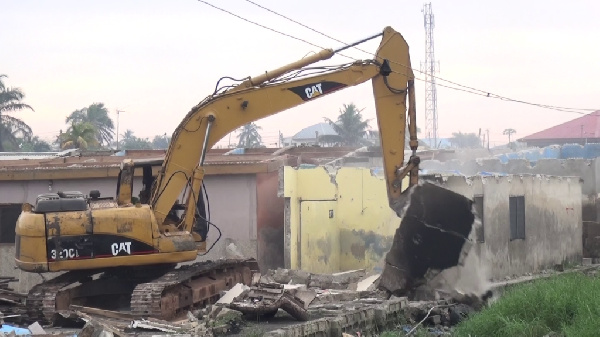 The Minister of Special Development initiatives who doubles as the Member of Parliament for Awutu Senya East Mavis Hawa Koomson has revealed that Kasoa flooding problems will soon be a thing of the past.

According to her, a lot of people have lost their lives and properties due to the annual flooding recorded in Kasoa.

In an interview with Kasapa FM News Yaw Boagyan, Mavis Hawa Koomson was confident that the issues of poor drainage systems and bad roads will be solved by the end of 2020.

Hawa Koomson disclosed this when she acted on behalf of Works and Housing Ministry to cut the sod for the construction of modern drainage on the ”Okrudu River” and another and 10 kilometers of Kasoa Town roads.

“Due to the planned works, we are going to do massive demolition exercises to pave a way for the construction of the road to end flooding in Kasoa and its environments.”

Furthermore, the contractors who have been assigned to work on the Okrudu river and Kasoa town roads appealed to Kasoa citizens to be citizen vigilantes and report any group of persons who will be seen stealing their materials to the police.