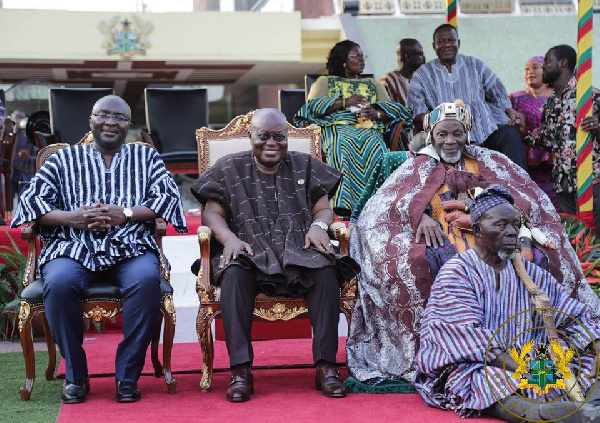 President Nana Addo Dankwa Akufo-Addo, has assured the Overlord and people of Dagbon that there are great days ahead of them as government takes steps to complete several major projects on going in their area.

Addressing a gathering held in honour of Yaa-Na Abubakari Mahama II, Overlord of the Dagbon Traditional Area at the forecourt of the seat of Ghana’s Presidency, Jubilee House, as part of his visit and courtesy call on him, President Akufo-Addo said “with Government determined to exploit and add value to the iron ore deposits in Shieni, to finish the second face of the Tamale Airport project, to construct the Tamale Interchange, the first of its kind in the Northern sector of the country, to see to the imminent completion of the Tamale Teaching Hospital, the upgrade the Yendi teaching hospital to a befitting status, to promote the sustainable development of Agriculture in the area and soon to commence the Yendi water project, it is evident that great days lie ahead for Dagbon under the stewardship of Yaa Na Abubakari Mahama II”.

President Akufo-Addo further stated that “the fruits of this development can only be appreciated by the people of Dagbon if the peace being enjoyed there is nurtured and maintained and if Chieftancy disputes is not allowed to become a part of the fabric of the great State of Dagbon nor of any part of our country”.

“Development can never take place in the atmosphere of confusion and chaos” President Akufo-Addo noted.

The Overlord of Dagbon, Yaa-Na a Mahama II, in his message read on his behalf by Dr. Jacob Yakubu Mahama, Zangbanun Na, thanked the President and members of the National House of Chiefs, the National Peace Council, the Security Agencies, the Clergy, UN Agencies and the Diplomatic Community for supporting Dagbon thus far. He also registered his thanks to all former Presidents of Ghana since the introduction of the Fourth Republican constitution for the various roles they played in securing the Peace of Dagbon. The Overlord of Dagbon also called on the President to help resolve the problem in Nanton.

“The Nanton problem is threatening the peace and unity we worked so hard to build. We appeal to you to
cement your singular efforts and the efforts of all stakeholders in this Dagbon Peace Project by bringing to an end the unwaranted and lawless usurpation of Nanton town by the Zoosal-Lana Haruna, it is an act which is not only undermining the relative peace in Dagbon, but a criminal one indeed” the Yaa Na said.

President Akufo-Addo in his address assured the Yaa Na that his government will do anything within its power to resolve the challenges in Nanton.

Nana Otuo Siriboe II, Omanhene of Juaben Traditional Area and also the Chairman of the Council of State who represented the Asantehene, Otumfuo Osei Tutu II, in his address indicated that the Asantehene is delighted that at long last there in peace in Dagbon. He indicated that the the success story of Dagbon must reflect in the rest of the country as far as national issues are concerned.

“The success of this peace effort shows clearly how we can draw in our traditional institutions to resolve many of our conflicts and indeed advance the development of the Nation. It is Otumfuo’s hope that this spirit of compromise will Manifest our national political discourse” Nana Otuo Siriboe II stated.

Background to Peace in Dagbon

The Committee of Eminent Chiefs, on November 16, 2018, informed President Akufo-Addo that they have reached an agreement with all parties involved to bring finality to the sixteen year old Dagbon conflict between the Abudu and the Andani Royal families when it presented a road map to peace in the troubled kingdom at the Jubilee House.

The committee was set up by former President John Kufuor in 2002 to find a lasting solution to the protracted Dagbon chieftaincy dispute after the killing of Yaa Naa Yakubu Andani II in Yendi in March 2002.

The road map gave the Abudu Royal Family two weeks to perform the funeral of Yaa Naa Mahamadu Abdulai IV from December 14 to 28, 2018, after which the final funeral rites of Yaa Naa Yakubu Andani II would take place from January 4 to 18, 2019.

With the funerals of the two Yaa Nas over, the four kingmakers of Dagbon, who include Kuga-Naa Abdulai Adam and the Gushie Naa, consulted the oracles to guide them in the choice of the right of the next Yaa Na. The Kingmakers settled on the Paramount Chief of the Savelugu Traditional Area, Yoo Naa Abubakari Mahama, who was subsequently enskinned on Friday the 25th of January 2019.