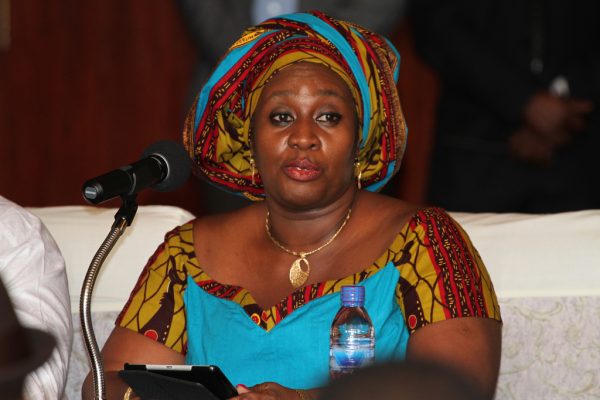 Forth Prosecution Witness, in the trial of Sedinam Christine Tamakloe Attionu, ex- CEO of the Microfinance and Small Loans Centre (MASLOC), Samuel Kotei NeeQuaye, a driver at  MASLOC has revealed that he confronted his former boss over the GHc 50,000.00 she denied receiving from him.

He told the Financial and Tax High Court presided over by Justice Afia Serwaa Asare Botwe, on Monday that he went to the home of his former boss to confront her after he got to know that she had denied receiving the said money on or about the 31st of August 2016.

The Prosecution Witness in court first identified the first accused person in Court and indicated that his role at MASLOC was to drive the former MASLOC CEO, Sedinam Tamakloe.

State Attorney, Stella Ohene Appiah, when she led the witness to give his evidence in chief asked as follows; “Cast your mind to the 31st August 2016 and tell the court what happened”?

In his answer, the fourth witness said “I was in the office when Madam Sedinam called me to pick some money from the accounts office. I went there and met a lady called Vic and she gave me a cheque voucher to sign”.

How much money are you talking about?

Was this the first time you were performing such a duty for A1(Sedinam Tamakloe)?

No, I did it several times

After 2016, did anything happen between you and A1 (Sedinam Tamakloe)?

“Yes, I was called to the secretary’s office and a letter was given to me inviting me to EOCO. I came to EOCO the following day and they showed me a cheque voucher and asked if I knew anything about it. I denied it because I couldn’t remember signing that voucher. From there, I came to the accounts office and saw Vic. She brought out the documents and I remembered signing the voucher. I came back to EOCO and told them that I indeed signed the cheque voucher”.

Did you have any form of interaction with A1 (Sedinam Tamakloe) on the money you sent her?

“I had information that she had denied receiving any money from me so I went to her house to confront her and she indicated to me that she knows I brought her the money”.

Where is the said house you visited?

“It is off the Spintex Road in the Hydraform Estates”.

When u went to see A1 in her house to enquire about the money, was she alone?

“No, her husband was there and her housemaid was around”.

During cross-examination, lawyer for the first accused person, Agbesi Dzakpasu, sort to establish from the witness if there was any form of secrecy in the entire GHc 50,000.00 transaction that took place on the 31st of August 2016. The Prosecution Witness indicated that there was no secrecy to same.

Justice Afia Serwaa Asare Botwe, subsequently discharged the witness and fixed the next Court sitting to the 20th of January 2020. The State is expected to call its 5th Witness at the next sitting.

Background and Facts of the Case

According to the brief facts as contained in the Charge Sheet filed at the Registry of the Criminal Division of the High Court in Accra, in 2017, the Economic and Organised Crime Office (EOCO) conducted investigations into certain alleged fraudulent disbursement of MASLOC funds involving the 1st and 2nd accused persons.

The investigations, the State says, revealed that in June 2014, MASLOC invested a sum of GH¢150,000 in Obaatanpa Micro-Finance Company Limited (Obaatanpa), a licensed Tier II microfinance company located at Ejura in the Ashanti Region.

Thereafter, the 1st Accused Person offered Obaatanpa a further investment sum of GH¢500,000. As a result, a MASLOC Agricultural Development Bank (ADB) cheque dated 24th July, 2014, in the sum of GH¢500,000 was drawn in favour of Obaatanpa.

Soon after Obaatanpa received the MASLOC cheque, the 1st Accused Person informed the Board Chairman of Obaatanpa that the investment amount of GH¢500,000 would attract 24% interest. Obaatanpa decided to return the amount to MASLOC since the interest rate being demanded by the 1st Accused Person was too high and unprofitable for its business and issued a cheque in refund of the loan amount.

In 2015, per letters, some of which were under the hand of the 1st Accused Person, MASLOC made demands on Obaatanpa for the payment of interest on the principal investment sum of GH¢500,000.

In response to the demands, Obaatanpa wrote a reminder to MASLOC concerning the payment of the loan amount and drew the 1st Accused Person’s attention to the unjustified demands whereupon the demands stopped.

In 2017, upon the assumption of office of a new Chief Executive of MASLOC, a demand notice was again sent to Obaatanpa for the payment of accrued interest on the same investment sum of GH¢500,000 whereupon Obaatanpa once again informed MASLOC that the said money had been refunded since 2014.

Investigations subsequently showed that MASLOC had no record of the amount having been paid to it and that the 1st Accused Person had appropriated the amount of GH¢500,000.

The facts further identified several other wrongdoings on the part of the accused persons that has lead to the loose of revenue to the State.