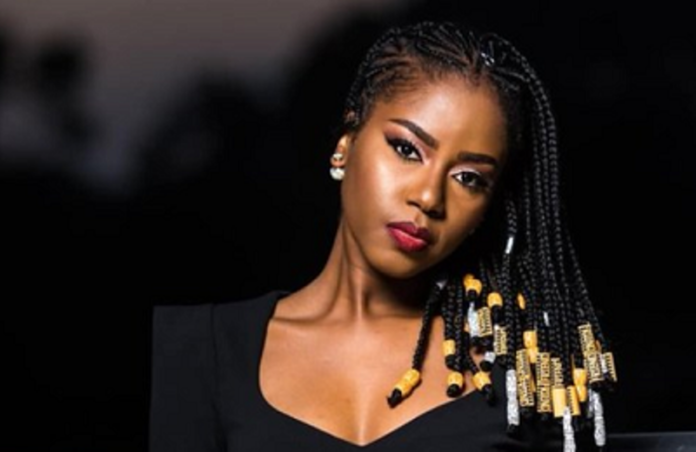 Ghanaian afropop and dancehall artiste, MzVee is back into active music.

The Female songstress announced on her Instagram page a set date for the release of her new song ‘Sheriff’.

Born Vera Hamenoo-Kpeda, MzVee in an interview with Tv3 revealed that depression was the reason for taking two years break from music.

Many alleged that her reason for quitting music is because she was pregnant. Others also claimed she had issues with her label boss, a claim that was rejected by Richie Mensah, owner of Lynx.

MzVee first burst onto the Ghanaian music scene in the summer of 2012 as the lead singer of Lynx Entertainment’s girl band D3.

The band, released hit singles such as ‘Good Girls Gone Bad’ and ‘Gyani Gyani’ before splitting at the end of 2013 due to educational commitments of the young group members.

MzVee launched her solo career with debut single ‘Borkor Borkor’ released in January 2014. She followed this with hit single ‘Natural Girl’ and went on to win the ‘Unsung Artiste Award’ at the 2014 Ghana Music Awards.

Her debut album was released in November 2014 and features collaborations with several award-winning artistes such as Stonebwoy, VIP, Shatta Wale, Richie Mensah, M.anifest and Didier Awadi.

Following the success of her award-winning debut album, MzVee released her second album titled Verified in November 2015 to rave reviews.

The album has earned MzVee 7 nominations at the 2016 Ghana Music Awards including ‘Album of the Year’ and ‘Record of the Year’ for the single ‘Abofra’ which features Efya. Her highly anticipated third album DaaVee was released in May 2017.