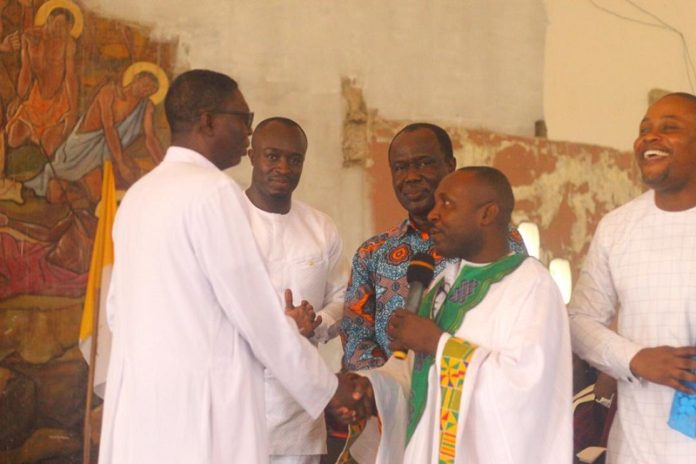 The General Secretary of the New Patriotic Party, Mr. John Boadu has called on Ghanaians to support the Electoral Commission of Ghana to compile a new voters’ register.

He made this call when he visited Martyrs of Uganda Catholic Church at Mamprobi, Accra, to redeem a pledge the New Patriotic Party made to the church during the memorial service of the late Chairman of Council of Elders of the party, Mr C. K Tedam.

Mr. John Boadu noted that the explanation the EC has given in support of the compilation of a new register is very reasonable and since the bottom line is to ensure free and fair elections in 2020, he doesn’t see the reasons why a particular group of people would organise demonstrations to kick against the new voters’ register.

The General Secretary who was accompanied by the National Treasurer of the party, Mr. Abankwa Yeboah, the Deputy Communications Director of the party, Mr. Yaw Preko and the NPP Parliamentary Candidate for Ablekuma South Constituency, Mr. Bernard Brown, made a cash donation towards an ongoing building project of the church.

Reverend Father Anthony Richard Opong who received the donation on behalf of the church thanked the party and prayed for President Akufo-Addo and his administration. He made a passionate appeal to Ghanaians not to allow politicians to influence them to take actions that would erode the gains we have made in the democratic journey as a country.

He made a request to government to prosecute persons who caused the crisis that hit the banking sector few years ago.