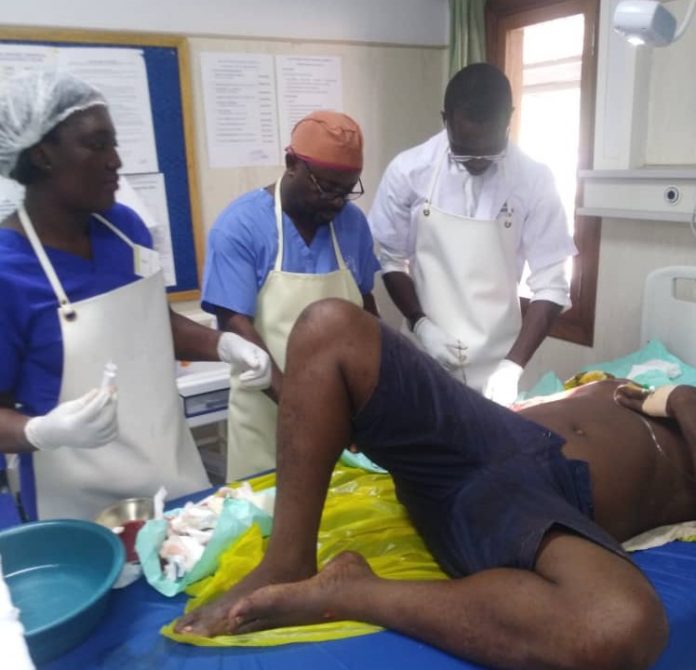 A commercial motorcycle rider locally known as ‘Okada Rider’ in the Shai Osudoku District is fighting for life having lost both arms in a horrific motorbike accident.

“He is still struggling with his life but both hands cut off. Okada riders are dying like animals in the constituency. I can’t overlook as an MP so providing them with insurance cover to me is one of my priorities,” the Member of Parliament for Shai Osudoku, Hon. Linda Obenewaa Akweley Ocloo told Kasapa News.

Decision by the MP providing insurance cover for about 2,500 in the Shai Osudoku Constituency of the Greater Accra Region has been criticized by the National Road Safety Authority accusing the MP of subtly endorsing illegality.

But the MP maintains that she cannot look unconcerned for her constituents to die due to the inability to foot their medical bills after involving in an accident.

She said, though it is illegal to operate commercial Motorbike transport in Ghana, bad roads in many parts of the countryside justifies the use of Motorbike for transporting the inhabitants and their farm produce since no vehicle could ply the roads adding, it has also become a source of livelihood for many young people.

Hon. Linda Obenewaa Akweley Ocloo said until the roads are fixed in the rural areas she supports proposals to legalize its operation particularly in rural parts of the country.

Despite being illegal, there is the widespread use of motorcycles for commercial and private activities in the country. But Okada operation is notorious for increasing fatal accidents.

A total of 732 people died through motorcycle accidents in Ghana in 2019.

The National Road Safety Authority (NRSA) has called for a new policy direction on the use of motorcycles and tricycles for commerce in the Country.

“We expect the Ministry of Transport to come out soon and give us a direction as to the new policy on using motorcycles and tricycles in Ghana, and then the agencies responsible for its implementation — the NRSA, the police and the Driver and Vehicle Licensing Authority (DVLA) — will come up with some regulatory mechanisms to be able to control the situation,” Director in charge of Planning and Programming at the NRSA, Mr David Osafo Adonteng was quoted in January 14, 2020 publication of Daily Graphic.