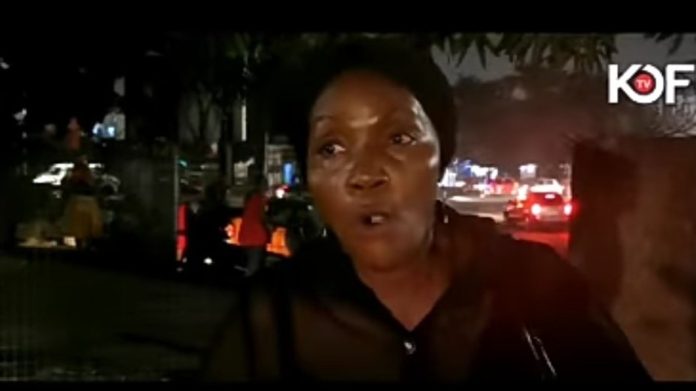 Mind blowing information gathered from the Ghana School Feeding Programme (GSFP) Secretariat has revealed that the woman who led the caterers of the programme to demonstrate in front of President Akufo-Addo’s Nima residence to demand for full payment of service rendered has been paid long before the demo.

Investigations have revealed that the demo leader, Madam Juliana Cudjoe, was allegedly paid to go and do the bidding of the opposition and some top echelons of the GSFP whose activities have come under investigations.

Her accomplices, the investigations further revealed, have also been paid.

They form part of the group of caterers numbering 8,409 spread across the country who have been verified by the Secretariat and the Ministry of Gender, Children and Social Protection, to have cooked during the Third Term of the 2018/2019 Academic Year.

Information gathered so far indicate that the government has released a total amount of GH₵138,823,843.53 out of which the demo leader, Madam Cudjoe, has so far benefitted.

It is on record that she is not owed by the current Minister which her pay masters allegedly used to malign her.

Madam Cudjoe, cooks for 412 pupils of the Dr. H. S. Bannerman Basic School in the Ablekuma South constituency. She cooked for 55 days and was paid GH₵21,979.45 after tax.

Our sources say the Government is working very hard around the clock to release some additional funds to pay caterers who have rendered services to the GSFP for the First Term of 2019/2020 Academic year.

This would be done when all documentation are verified by the GSFP and approved by the Gender Ministry.

But despite this effort, inside information has it that some detractors who are bent on milking the country and always creating ghost names into the system are still bent on having their way based on which they are seeking to incite the caterers against Accountant of the GSFP and the Gender Minister.

This portal cannot immediately confirm the motive behind the action of Madam Juliana Cudjoe and her cohorts. However, some insiders at the GSFP and some opposition elements, we are told, allegedly succeeded in convincing her to carry out this condemnable activity to create some political expediency for the opposition.

It has also turned out that the caterers who portrayed to the World in the evening of Wednesday, January 8, 2020, that they had travelled all the way from some parts of the Eastern Region, was not true. Information gathered so far indicate that they were from some parts of Greater Accra.

The caterers who gathered in front of the President’s Nima residence, the scene of which was captured by Kofi TV, saw them informing the News Anchor, Kofi Adoma, in an interview that the GSFP was heavily indebted to them, a situation they further said had resulted in their suppliers running after them for money worth of goods they supplied to them

Madam Cudjoe, the lead woman in the video, which has since gone viral on social media platforms, and also used by some of the mainstream media, claimed to have not been paid for one and half years of service rendered for the School Feeding Programme.

She was also heard calling on the President to immediately sack the Minister of Gender, Children and Social Protection, Hon. Cynthia Mamle Morrison, who has oversight responsibility over the Ghana School Feeding Programme for non-performance.

However, her claim, together with others, have turned out to be false.

Our sources say there are some top officers of the GSFP and some opposition elements who are instigating caterers against the Gender Minister and the Chief Accountant at the School Feeding Secretariat because “they are blocking their schemes of looting into the payment file”.

Some officials of the GSFP who want to remain anonymous when contacted said some of the caterers including Madam Cudjoe, are part of a larger group whose claims for the 2017/2018 academic year are being verified following the revelation by the Auditor General’s report about payments to non-existent caterers, duplication of schools, double payments and inflation of enrollment.

Madam Cudjoe and her associates who fall in that category, have been informed about the development and actions are being taken by the School Feeding Secretariat and the Gender Ministry to sanitize the system, our sources said.