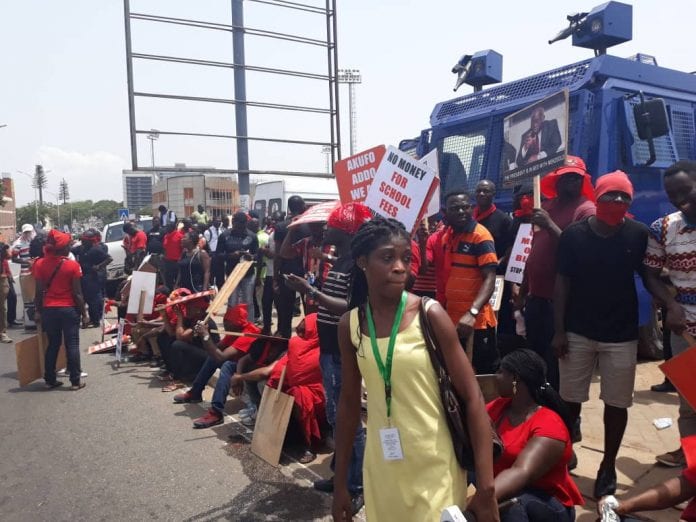 Aggrieved customers of embattled gold dealership firm, Menzgold have vowed to do everything possible within their might to take back every pesewa of their locked-up funds with the firm.

According to them, they will not allow their fate to be same as customers of Pyram and DKM who never had their monies after the saving and investment schemes folded up.

“Lots of people have died from stress over their locked up funds and this struggle to get our monies is not stopping until we receive every pesewa owed us. Some people are saying just as customers of Pyram and DKM never had their monies back, we Menzgold customers will also not receive our money. But we are telling such people that our fate will not be same as pyram and DKM customers. We will take all our monies from Menzgold,” the Ashanti Regional PRO of Menzgold Customers Amankwa Baffuor told host Kwaku Owusu Adjei on Anopa Kasapa on Kasapa FM Thursday.

Scores of Menzgold customers on Wednesday stormed the home of the CEO Nana Appiah Mensah over their lock-up investment. In the process over 100 of the customers were arrested and are to be arraigned before court today, Thursday.

The customers who claim gunshots were fired from the home of the embattled CEO are demanding proof that payments of the locked-up investment have begun as claimed by NAM 1, as Mr. Appiah Mensah is popularly known.

Around 1993 the two non-bank financial institutions started operating a loans and savings scheme without licence from the Central Bank. Given the free terrain by the Central Bank’s lack of supervision, the phony institutions succeeded in luring unsuspecting members of the public and top government officials to deposit billions of cedis with them in return for unsustainable interest rates.

Following the Bank of Ghana’s failure to check the companies, it was only a matter of time for the companies to go bust and the rest now belongs to history.