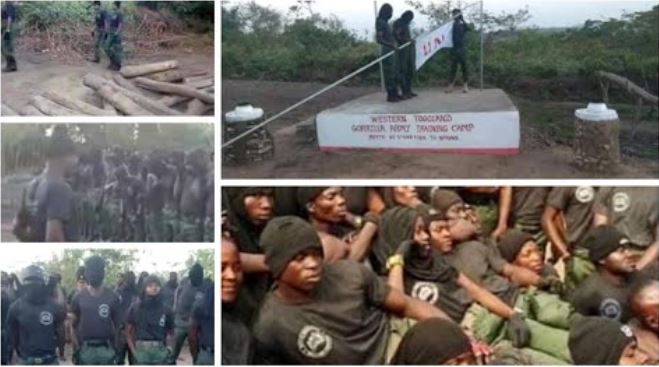 An Accra Circuit court has remanded 21 suspected members of separatists group, Homeland Study Group Foundation(HSGF) who were arrested in Dodze in the Volta Region

The suspects have been charged with participation in the campaign of a prohibited organization and attending a meeting of the organization.

According to the prosecution, an amount of money ranging between GHS 400 and GHS 800 were paid by these persons via mobile money to be recruited into the military arm of the Western Togo secessionist group.

Meanwhile, the Homeland Study Group Foundation(HSGF) has denied knowledge of any rebels being trained by it for the alleged independence of Western Togoland.

A statement by the group warned that the continuous arrests of persons purported to be aligned to the Foundation by police and the military will give rise to any rebels to infiltrate.

”This continuous tagging of the HSGF and making a mountain out of a molehill will cause more confusion and retaliation if the HSGF had not been exercising more and better political maturity.

“The foundation is very worried how Ghana is managing this issue knowing very well that the leadership of HSGF is very law abiding. We have made ourselves available to the laws of Ghana on several occasions but Ghana is rather expressing her disinterest in the case. Any time Ghana took suspects to her own high courts, the suspects were discharged.
Innocent Western Togoland citizens persistently have been harassed here and there. Many for fear have disappeared while many suffered severe torture in the hands of the Military and the Police. Others are shot and information about their bodies are unaccounted for.
All these are panaceas for chaos which the leadership of Ghana should for goodness sake thread cautiously.”

Officers of the Ghana Armed Forces(GAF) on Monday, February, 17, 2020 arrested 20 people described as rebels in the Dodze in the Volta Region seeking to have the region secede from the Republic of Ghana.

The arrested persons made up of 19 males and 1 female are part of the Homeland Study Group Foundation(HSGF) which has been demanding secession from Ghana over the years.

In December 2019, pictures emerged on social media of a uniformed group supposedly being trained as soldiers at a place called the Western Togoland Training Grounds in the Volta Region.

The arrested persons are believed to be part of the so-called ‘army’.

Sources in the Ghana Armed Forces say a team of military officers flew from Accra to the Volta Region to effect the arrest.

He was earlier in May 2019 arrested together with 80 other members of the group when they were allegedly planning to declare independence for Western Togoland.

Nine of them were later charged with conspiracy to commit treason felony, abetment of unlawful training, unlawful assembly and offensive conduct conducive to the breach of peace and put before court.

The Attorney General, however, in July discontinued the case based on which the High Court trying them discharged the accused persons.

Charles Komi Kudzordzi has been on the run since the charges against him were dropped.