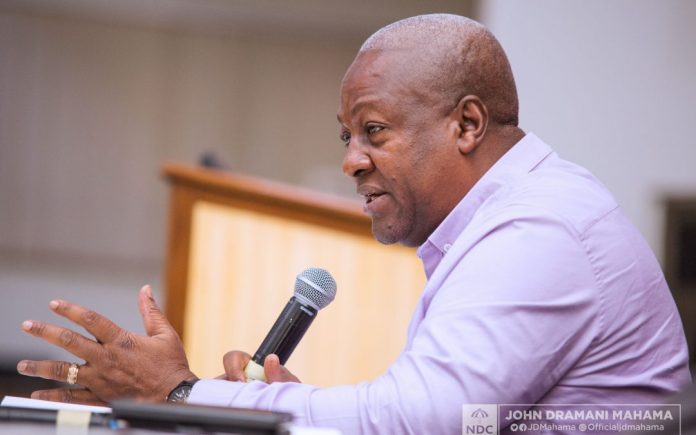 Flagbearer of the opposition National Democratic Congress(NDC) John Dramani Mahama says the ruling New Patriotic Party(NPP) government has nothing in store for Ghanaians beyond the four year mandate.

“Don’t expect anything better than what they’ve done. The onus lies on you to vote with with your conscience in this year’s election. Assess the quality of your own life under this regime and vote based on that, just as former President Kufuor said years back,” the former leader told locals of Sienchem in the Asutifi South Constituency of the Ahafo Region on Tuesday during his Speakout tour.

He re-echoed that all the economic policies of the Akufo-Addo government were doomed to failure and could not stand the test of time, even under four years, asking Ghanaians to vote out the NPP government in the December general elections.

“God created darkness for a reason, so that we can all see the benefits of light. Today we’ve seen the importance of light. All the promises of the NPP in 2016 have turned out to be a sham. Be ye employment opportunities, 1 district 1 factory, 1 million dollars for each constituency, 1 village 1 dam, among others. They were thinking four years will never come. Infact they cannot do anything meaningful beyond what they’ve done.” Mr Mahama said.

John Mahama joins the chiefs and people of Sienchem in the Asutifi South Constituency of the Ahafo Region.

“Having achieved all these significant milestones, even in the midst of the difficulties we met, I am hopeful that the Ghanaian people would reward my party with another resounding victory in 2020. We will not be complacent, and we will work hard for victory, regardless of the fact that ‘One Good Term Deserves Another’. We need four more years to do more!,” these were the words of President Akufo-Addo in his bid for another term.

He claimed he was convinced the programmes and policies his Government wanted to undertake would revive the Ghanaian economy, improve the health and social wellbeing of citizens, create a society of opportunities for all, and help put Ghana onto the path of progress and prosperity.

“Indeed, many were those who made disparaging remarks about our policies, and went as far as describing them as election gimmicks. However, by dint of hard work, we have implemented these flagship programmes, and we have begun to see their impacts throughout the country, with the overarching vision being to realise our vision of moving Ghana to a situation beyond aid,” he said at the maiden edition of the Results Fair, held at the Accra International Conference Centre, on Tuesday, 14th January, 2020.