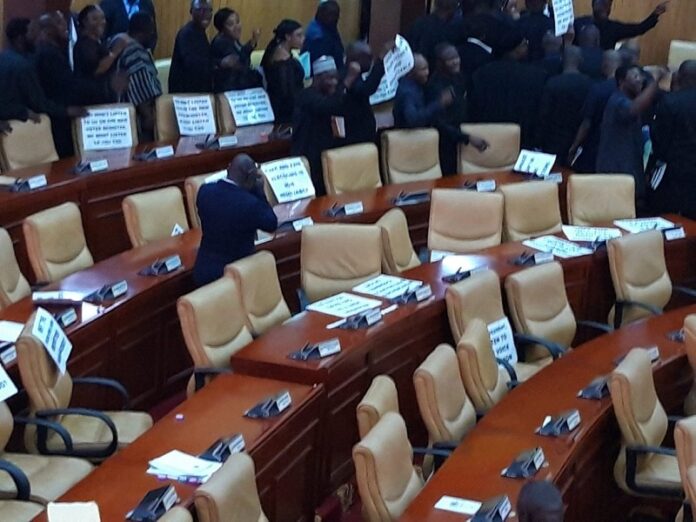 The Minority in Parliament says the several ill-happenings in Ghana since President Akufo Addo assumed power is the reason why the caucus staged a walkout on President Akufo-Addo during the State of the Nation Address today.

“As we speak, the President has refused to implement the recommendations of the Emile Short Commission following the state sponsored terrorism that occurred during the Ayawaso West Wuogon by-election in January 2019.  The President continues to shield his indicted appointees as he even confers on them more authority to perpetrate mayhem ahead of the 2020 presidential and parliamentary elections.

“Contrary to the Emile Short Commission recommendation, President Akufo-Addo has blatantly refused to disband the illegal SWAT team which has been populated by known hoodlums belonging to his vigilante groups,” the statement said in part.

The statement also stated the shut down of some radio stations as part of the reasons for the boycott.

The Minority holds the view that Ghana is currently not in normal times.

STATEMENT BY MINORITY ON THE WALKOUT AT TODAY’S STATE OF THE NATION ADDRESS AS ADDRESSED BY MINORITY LEADER, HON. HARUNA IDDRISU IN PARLIAMENT

We duly welcome you to this press briefing and thank you for your continuous indulgence and dedicated contributions to free expression in Ghana.

We, constituting the Minority in Ghana’s Parliament have convened this press interaction to put forth the reasons for staging a walkout on the day the president was expected to deliver a message on the state of the nation as required by Article 67 of the 1992 Constitution of Ghana.

From the outset, we need to make clear that these are not normal times in the democratic trajectory of our country.

We are clad in black today to mourn the fascist and authoritarian tendencies that have conspired to threaten the health of Ghana’s democracy.

Since becoming President of our republic, Nana Addo Dankwa Akufo-Addo has conducted the affairs of state with the kind of tyranny, despotism and authoritarianism that frightens many objective observers.

We have in the face of extreme provocation exercised restraint and urged the president to depart from his perilous path that puts the democracy of our country at great risk.

Sadly, matters are totally out of control. The democracy we all toiled and sacrificed to establish is now threatened by the highhandedness of President Akufo-Addo. The man who in opposition styled himself as a champion democrat has turned out to be a nightmare and an existential threat to our fledgling democracy.

We continue to witness heightened impunity from officialdom.

As we speak, the President has refused to implement the recommendations of the Emile Short Commission following the state sponsored terrorism that occurred during the Ayawaso West Wuogon by-election in January 2019.  The President continues to shield his indicted appointees as he even confers on them more authority to perpetrate mayhem ahead of the 2020 presidential and parliamentary elections.

Contrary to the Emile Short Commission recommendation, President Akufo-Addo has blatantly refused to disband the illegal SWAT team which has been populated by known hoodlums belonging to his vigilante groups.

Many more of these blood thirsty hoodlums continue to be trained at national security installations and are being armed ahead of the 2020 elections.

President Akufo-Addo goes down in history as the only President in the Fourth Republic to supervise the cruel removal of Chairperson of the Electoral Commission, Madam Charlotte Osei. That conduct in infamy appears to have paved the way for an elaborate scheme to rig the 2020 elections by compiling a new Voters Register. Majority Leader Osei Kyei-Mensah-Bonsu let the cat out of the bag when he stated emphatically that if the NPP was successful in compiling a new Voters Register, the NDC will never come back to power. One wonders how a register that brought the NDC to power in 2012 and the NPP to power in 2016 can suddenly become so discredited in the eyes of the NPP if not for the sinister agenda exposed inadvertently by the Majority Leader.

The Akufo-Addo-led Government in cahoots with the Jean Mensah-led Electoral Commission remains intransigent despite overwhelming public opposition including from a strong coalition of Civil Society Organisations and Political Parties.  We cannot help but agree with the US State Department Human Rights report which has raised concerns of possible voter suppression in opposition strongholds as the real intention for the needless and wasteful new Voters Register.

Under President Akufo-Addo’s watch, media freedoms and free expression have come under unprecedented attack. The Government has still not found the killers of investigative journalist, Ahmed Hussain-Suale who was assassinated in cold blood. Despite demands from the international community for action, he refuses to speak to the matter and no updates on investigations have been provided. Many journalists continue to be attacked, with others having to seek refuge outside the jurisdiction.

His Government continues to close down Radio stations particularly those with affiliation to his political opponents. Only last week, his administration after the Gestapo closures of Radio Gold and Radio XYZ, and many others, closed down Radio Tongu and Fox FM, Takoradi in the most bizarre of circumstances.

The growing culture of impunity and the tyranny that has reached alarming proportions was once again on the prowl when agents of National Security demolished businesses belonging to Ghanaians in the private sector located at the Ghana Trade Fair Site at dawn under the cover of darkness. Not even notice was served on the owners to take out their valuables ahead of the barbaric demolition. We are not in any doubt that the cruel nature of the demolishing which has been justified by the President’s appointees and spokespersons was targeted at former award-winning journalist, Raymond Archer who many in this administration have not forgiven for his incisive and explosive investigative pieces of yesteryears.

As noted, these are not normal times. Desperate times call for desperate measures. Our tradition is credited for laying the foundations for this Fourth Republican dispensation. It is our moral duty to the Constitution we swore to protect and the people we serve in this House to rise and resist oppressor’s rule – in that enduring and rallying call of our national anthem.

Our walkout was therefore a bold protest against tyranny and to send a very clear message directly to President Akufo-Addo that enough is enough. We shall no longer accept the growing levels of impunity and unconstitutionalism masked by duplicitous and hollow rhetoric.

Ghana belongs to all of us and so shall we all stand to defend the democracy we have all laboured for. Like Thomas Jefferson, we declare: “I have sworn upon the altar of God, eternal hostility against every form of tyranny over the mind of man.”

Thank you for your attention.