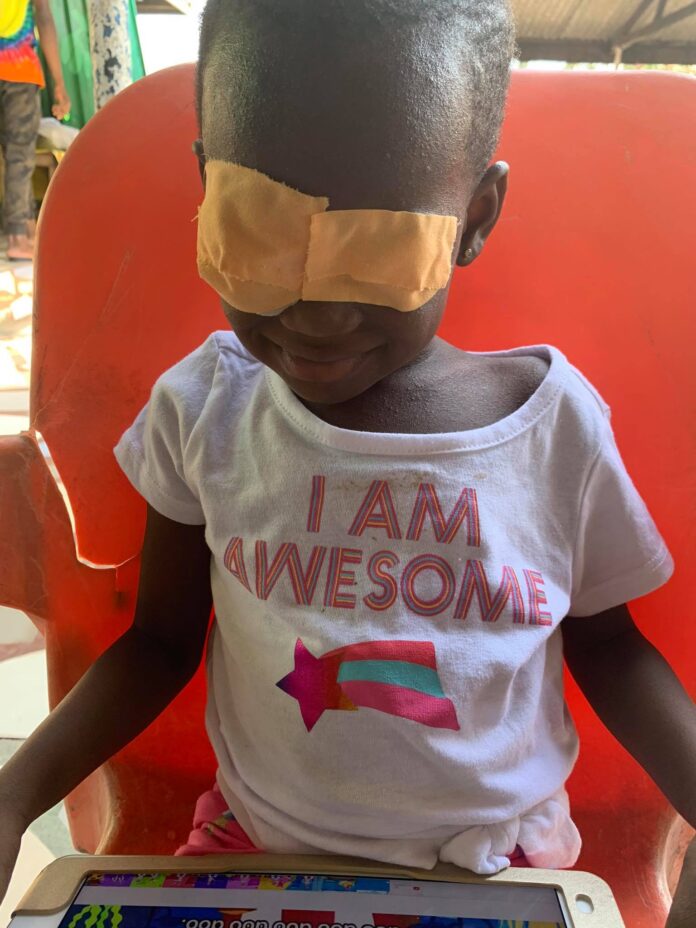 Case in point little Doris and her battle with Retinoblastoma.

Over the past couple of years, the public has been tasked with donating to multiple charity fundraisers for all types of complicated health conditions ranging from infants to adults.

Doris and her parents lived in the village of Ehi in the Volta Region. Doris presented spots and swelling in her eye. Concerned parents sought help from a local eye clinic where drops were prescribed with no advice to return for proper examination.

After a period, the diseases affected her other eye at which point the clinic referred her to korleBu teaching hospital and the parents were duly informed Doris had cancer and both eyes had to be removed. Without a referral to an oncologist or a social worker assigned, the parents were sent on their way with instructions to return with 1800ghc for the proposed enucleation.

Not having a full understanding of cancer or the repercussions of their lack of urgency, the parents returned to their village and stayed until the tumours became engorged, rendering the child deformed and the cancer fast spreading in her body.

Funds were raised from the public by the group aptly named #TeamDoris and the child returned to KorleBu hospital. With education and cash readily available, care became swift, the tumours began shrinking considerably and the cancer held at bay.

After over 45,000Ghc expended on treatment and more on family rehabilitation however, Korlebu Teaching hospital has become unable to treat the child any further due to lack of advanced therapies and surgery.

The family has once again turned to the public for funds to send little Doris to Fortis Healthcare in India for surgery. The thought that your country’s healthcare cannot save you in cases of complicated medical conditions is frightening, to say the least.

The question the narrative above poses is thus; would things have turned out differently for Doris if her parents were educated?

The hospitals’ love-hate relationship with the social welfare department have gradually pushed them out of many major centres around the country.

What happened to the community health nurses who used to patrol the neighbourhoods back in the day? At the time of writing this article, we discovered most have been sitting at home, waiting for posting.

What is the future of a child growing up with illiterate parents or a child growing up in rural Ghana where no one really regulates these small underfunded and understaffed clinics? How much research do we make into our health? What precautions do we take with our diet and consistent health check-ups?

The National Health Insurance Scheme is considered a critical part of Ghana’s social welfare system and in some cases, the social welfare department intervenes for persons with conditions that do not fall within the scope of the national health insurance scheme but what the social welfare department does most often than not, is to also go cup in hand to benevolent societies and organizations. It is up to local community leaders to encourage citizens to stop politicizing the NHIS and rather educate and encourage citizens on its benefits and how to make the most of it.

If you are able to read and understand this article, you are among the blessed few. You will not allow your child to deteriorate to this extent. You would run yourself paranoid making sure your child makes it out with positive results. You would ask the Doctors questions and research conditions. You will seek answers.

Please support Doris to Fortis Healthcare in India. The $25,000 required includes flights, hotels, meals and treatment for three people for the 3-month stay in India.