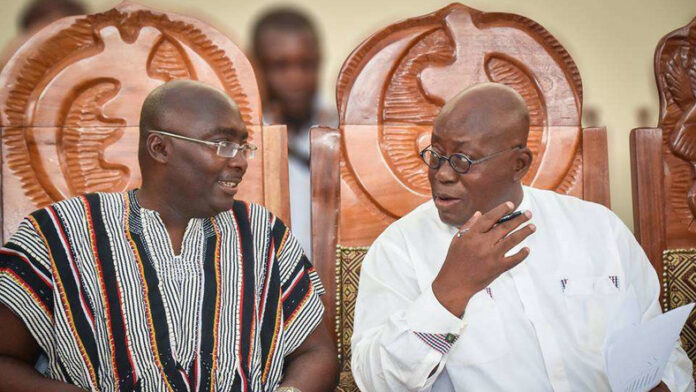 President Akufo-Addo has announced that he will be running for President in the 2020 elections with the sitting Vice President Mahamudu Bawumia, as his running mate.

The President made the disclosure at the Headquarters of New Patriotic Party (NPP) when he addressed party faithful after submitting his nomination forms to the Party leadership in fulfilment of the laid down rules in the NPP constitution.

“Our party regulations says that once a flagbearer is chosen, the flagbearer must choose his running mate. This is not a matter that needs any consideration, once my hands are lifted, I will also lift up the hands of the Dr. Mahamudu Bawumia. He is certainly the one I will be running with” President Akufo-Addo said.

President Akufo-Addo was quick to suggest to the Party folk to make sure that as soon as the Electoral Commission begins its upcoming “Voter Registration Exercise”, they and their households will go and write their names in order to secure their right to vote in the 2020 elections and beyond.

General Secretary of the NPP

General Secretary of the NPP, John Boadu, before he invited the President to address the Party members noted that President Akufo-Addo is the only member of the NPP who has filed his nomination forms to run for the flagbearership position of the NPP ahead of election 2020. He urged the rank and file of the party to get into campaign mode forthwith to ensure that the party wins back to power after the 2020 elections.