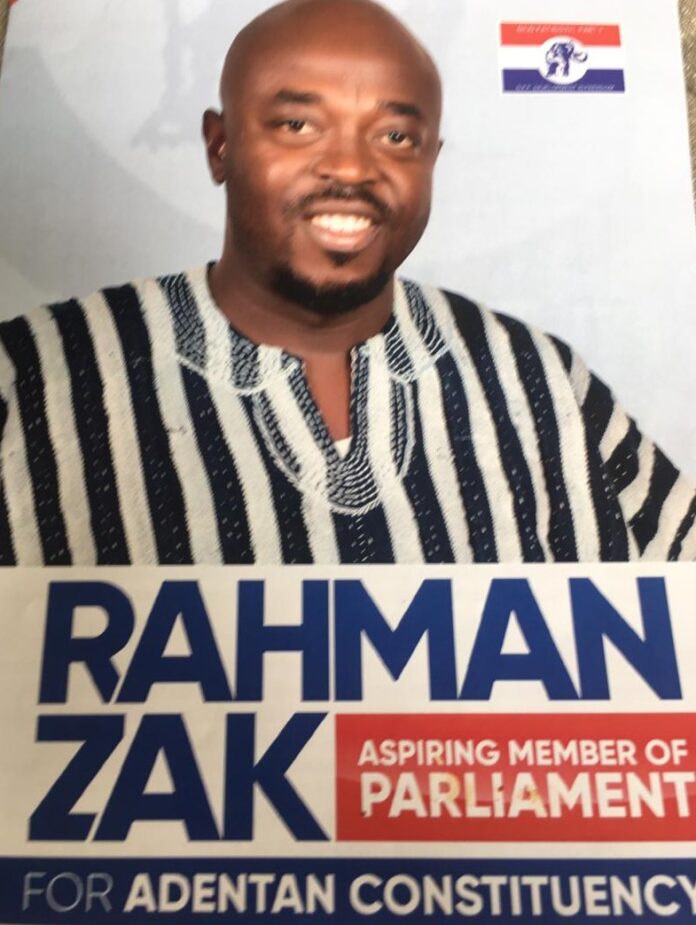 Aspiring Parliamentary Candidate for Adenta, Rahman Zak says he remains confident that he’ll wrestle power from the incumbent MP, Buabeng Asamoah to put Adentan on the right path of development.

According to him, his experience in the corporate world and wide-network put him in a good position to bring into fruition the development that Adenta has lacked over the years.

Rahman Zak who’s the Chief Executive of ARZ Holdings and ARZ Company limited is considered by many as the most qualified candidate to hold the office of the Member of Parliament for Adentan Constituency.

Rahman Zak boasts of a magnificent and unblemished political profile.

He was the first to form the TESCON club of the Central University and was elected twice as President of TESCON from 2008-2010. He was one of the TESCON Coordinators for Nana Akufo Addo Campaign in 2008.

Rahman Zak formed and chaired the NPP Rahman Club in Nima, East Ayawaso in 2010 which aimed at bringing more Muslims to join the NPP as a party and subsequently increase the number of votes for the NPP in Nima. He also contested in 2006 Parliamentary primaries of East Ayawaso.

He was the Campaign Manager and Communications Director for Capt. Rtd. Effah Darteh prior to the 2016 general elections. He was part of the campaign trail that visited all the regions of Ghana and the grassroots to campaign for NPP.

In 2018, Rahman Zak facilitated a meeting between Council of State – Central Region and a Czech Republican company/German Company Siemens and Kovosta fluid which aimed at bringing a new way of energy combustion and energy generation for the energy sector in Ghana. He also attended a Ministerial workshop in China on behalf of the Savannah Regional Coordinating Council to seek for investors to come and develop the newly created Region by the NPP Government – Savannah Region.

By a combination of sacrifice, selfless devotion, commitment, and dedication to the party Rahman Zak has helped in several ways in the growth and popularity of the party especially among the Muslim community and across the country.

He has been a strong and passionate member of the NPP since his school days to date and has contributed in vast ways to uplift the name of the party.