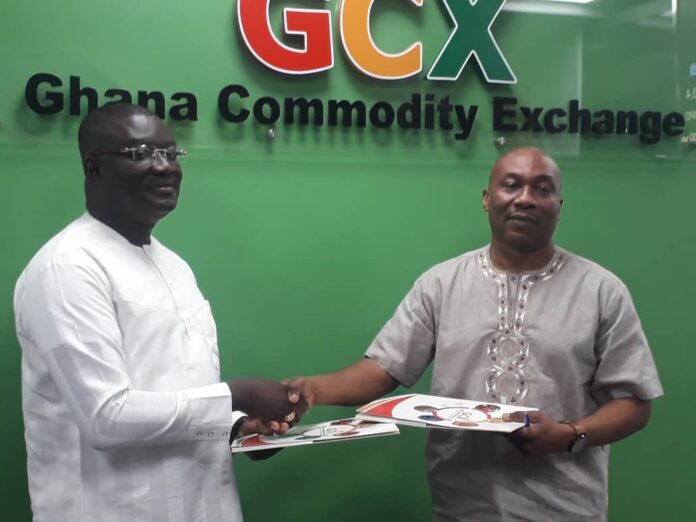 Farmers in the Juaben Municipal District can now harvest their farm produce without having to think about storage facilities.

Over the years, most local farmers have run at very huge losses due to the lack of storage facilities for their farm produce.

As part of measures to ensure that post-harvest losses become a thing of the past, President Akufo Addo in 2017 launched the One District One Warehouse programme.

The purpose of these warehouses would be to handle produce, as well as to store the anticipated surpluses under the “Planting for Food and Jobs (PFJ) initiative.

The warehouse project is a component of the government’s Infrastructure for Poverty Eradication Programme (IPEP).

On Monday, the Executive Chairman of the Juaben Food Bank, Nana Abayie Sriboe, signed a Memorandum of Understanding (MOU) with the Ghana Commodity Exchange, to support farmers in and around the Juaben municipality to store and trade their commodities through the Exchange’s platform.

The warehouse with a capacity of 1000MT, will store grains for over 12,000 farmers in Ejisu, Effiduase, Kumawu, Asokore and its environs.

The Food Bank is a wholly-owned Ghanaian company with Nana Abayie Sriboe and Gary Adu-Darko as shareholders.

It is an agro-processing and storage company with the vision of processing maize into grit, cassava into gari, rice milling and animal food processing.

Speaking to Kasapa Fm after the signing ceremony, the Executive Chairman, Nana Abayie Sriboe said farmers will now have the opportunity to fight persisting problems in the market such as highly volatile seasonal prices, lack of weighing, grading, certification and limited access to credit.

He indicated that such problems will be addressed by the GCX and would be of immense benefit to both farmers and customers.
Education.

Nana Abayie Sriboe explained that farmers in the municipality will soon be briefed about the operations of the warehouse and its partnership with the GCX to enable the farmers better understand the need for them to collaborate with the Food Bank.

He said the Juaben Food Bank and the GCX will organize a float through the towns and villages of the Juaben Municipality to inform all farmers about the warehouse and the operations of the GCX.

He said educating the farmers is very essential since it will ease the company’s dealings with the farmers.

Expressing excitement about the partnership, the Chief Executive Officer of the Ghana Commodity Exchange, Dr. Kadri Alfah said farmers will be linked to the exchanges electronic trading platform where the farmers can find buyers easily for their commodities at premium prices.

“Grains from the beneficiary farmers would be cleaned, graded, fumigated, weighed and packaged into standard 50kg bags to increase their market appeal.

The farmers would be able to access credit through their warehouse receipt which would be issued by GCX”, Dr. Kadri Alpha explained.

The GCX operates a national warehouse receipt system through which farmers in Ghana are able to access markets, undertake price discovery, reduce their transaction cost and manage operational and market risks.