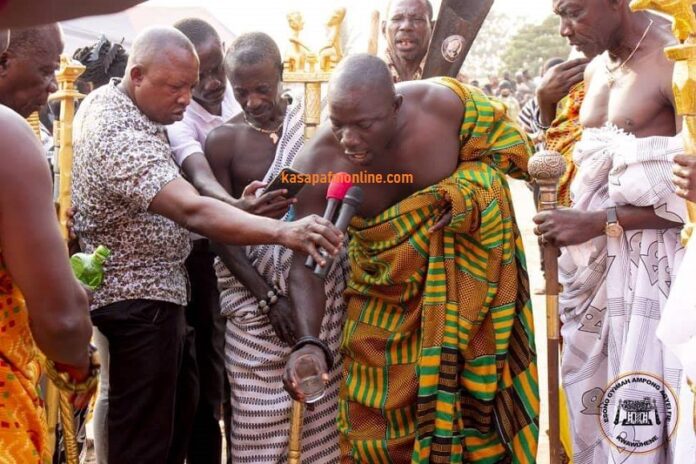 After experts had revealed on EIB Network’s Nkawkaw based Agoo FM that the Odweanoma Mountain risks collapsing should fire outbreak continue in Kwahu Enclaves, Kwahu Traditional Council led by the President Daasebre Akuamoah Agyapong II has poured libation calling upon the gods of the land to punish perpetrators.

Kwahuhene Daasebre Akuamoah Agyapong II through his Nsumankwaa hene, Nana Akomea Siaw who performed the necessary rites commanded the gods of the land to take actions against perpetrators in the rampant bush fires.

According to Chiefs in Kwahu, it’s been long overdue that bush fires must halt in the Kwahu enclave.

Speaking on behalf of KwahuHene and the Kwahu Traditional Council, Nana Akomea told Agoo FM’s Kwame Abuoku after performing the necessary rites at Abene Palace that the libation is an offering to gods, spirits residing in waters and stones to deal with perpetrators accordingly to serve as a deterrent to others.

“Some People are destroying our properties through fire outbreaks, trees planted by the government are being destroyed by fire, our water, mountain, the mountain risk collapsing. This act is a disgrace to Kwahu as a whole so we are calling upon the gods of our land now. Fire outbreak started in 1983 and people have taken advantage of it but it is worsening in 2020 the reason for us, Kwahu Traditional Council to rise up. whoever will try to cover up will be punished by the gods”

The Kwahu Mountain and most parts of Kwahu enclave have recently been experiencing continuous fire outbreaks causing major threats in the affected areas.

The District Fire Commander in-charge of Kwahu and Atewa, DO3 Anthony Yaw Mayebi, in an interview last week said per their investigations, they have realized that the recent fires are a deliberate act by hunters who set fire to trap game (bush animals).

When asked on what could possibly happen to the mountain if this attitude continues his response was that: “When this goes on to a point that the whole grove is burnt down leaving bare mountains, it is likely to collapse”.

He continued that his outfit together with the DCE, Emmanuel Attah Ofori Snr, NADMO, Forestry, etc have deliberated and reached a consensus to set up a task force that will be monitoring and arresting perpetrators.

He believes that arresting and prosecuting such people will serve as a deterrent to others.

Kwahu Traditional council has expressed worry over the situation the reason why libation was poured since the future of Kwahu must be protected from now.

On his part, Abene Krontihene Nana Simpeh Owiredu III accused hunters of causing the menace adding that, Nananom has arranged guards to protect the lands and for that matter, the least punishment will be to kill dogs owned by these hunters.

Wiamoase not first to grow apple in Gh.; it’s been in Kwahu for years – Jeff Konadu