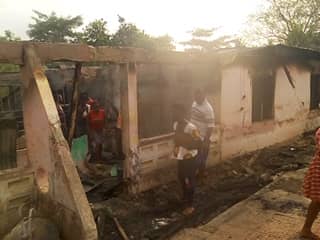 Two members of a family have been burnt to death in their sleep at Nkawkaw Domeabra in the Kwahu West Municipality of the Eastern Region.

The 70-year-old man Mr. Sammy Simpeh a former assembly man for Domeabra Electoral Area and his 12-year old son whose name was identified as Kwame met their untimely death while they were asleep.

An eyewitness Yaw Yeboah who spoke to Agoo fm revealed that the wife escaped death and has been admitted to the Agyarkwah Hospital, Nkawkaw for treatment.

He told host Kwame Koranteng on the Morning Show Ene Nso Bio today that, the cause of the incident is not yet known adding that, the fire officers although arrived on time but could not save her family.