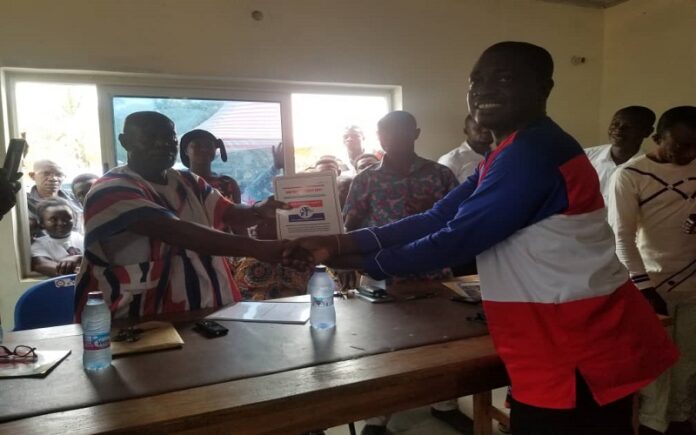 An Elder of the Church of Pentecost, Samuel Binfo Darkwa, has filed his nominations forms to contest for the Adansi Asokwa New Patriotic Party (NPP) Parliamentary primaries.

He will come face-to-face with the experienced incumbent MP, Hon. Kwabena Tahir Hammond who is popularly known as K. T. Hammond.

The former President of the National Union of Ghana Students (NUGS) was accompanied by delegates and other sympathizers of the party in a huge float amidst singing and drumming on some principal streets in the Adansi Asokwa community through to the party’s constituency office.

The forms, accompanied with a filing fee of GH₵20,000.00, were received by the Chairman of the party’s constituency Council of Elders, Nana Kwadwo Nkansah, who also chairs the constituency Elections Committee, and the party’s Secretary Kwame Antwi in the presence of the other constituency executives.

Nana Nkansah having read through the forms appended his signature to confirm that the Pentecost Elder has met all the requirement in filing the forms.

The Chairman of the constituency, Kwame Owusu, commended the young politician for the bold step taken to contest the long serving Hon. K. T. Hammond in the primaries.

He, however, urged the aspirant and his supporters to conduct decent campaign provided he excels through the vetting exercise at the regional level.

“I will like to commend you for the brave step to contest Hon. K. T. Hammond. I beg you and your supporters not to give us the constituency executives, troubles in your campaign activities. The primaries is just an internal exercise to elect a parliamentary candidate for the party for the 2020 general elections. Please avoid character assassination style of campaigning because it can divide the party to the advantage of our main opponent’’, he pleaded.

The aspirant, Sammy Binfo Darkwa, in response promised to abide by the rules of the parliamentary primaries.

“Mr. Chairman, I Sammy Binfo Darkwa, won’t be the one to create problems in the constituency. You can trust me for that. I will make sure no member from my campaign team do anything contrary to the rules set by the party for the parliamentary primaries’’, he assured.

The event was immediately followed by a press conference where about 300 delegates from the constituency declared their support for the former NUGS President.

They also pledged to campaign for him to unseat the incumbent MP for the constituency. 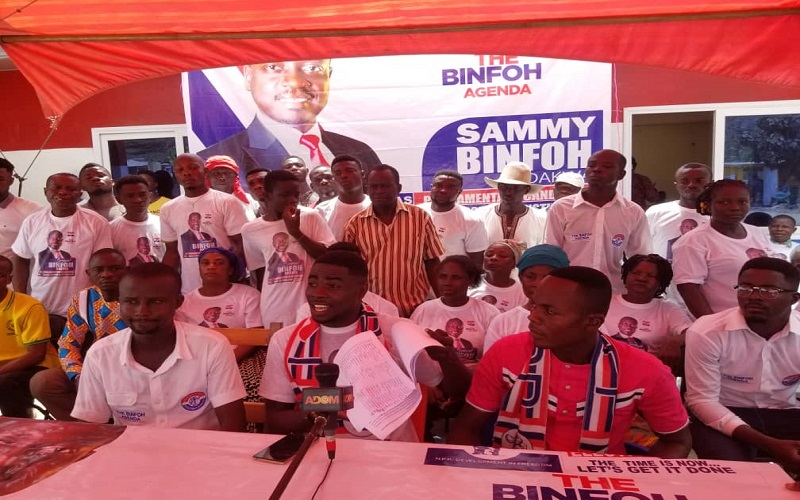 Francis Quason, who addressed the media on behalf of the group, said they share in the vision of the aspirant which they believe will restore the missing hope and link between the youth in the constituency and the party.

“In the 2016 general elections, we all know what the party went through before we managed to win the elections. The President even performed better in the constituency than our MP who has been in Parliament for 20 years. It’s now clear that our chances of retaining this seat with Hon. K. T. Hammond as our parliamentary candidate can’t be a surest bet. That’s why we are advocating for a change’’, he stressed.