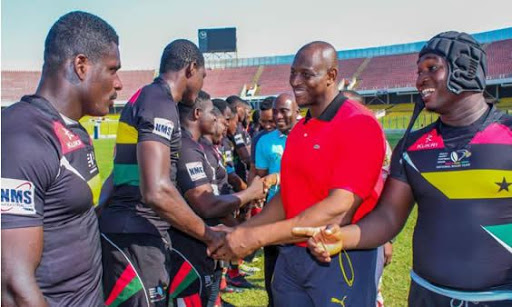 Ghana has awarded a sum of one hundred thousand United States Dollars to the Ghana Rugby Team to support their activities and preparations toward their future engagements.

President Akufo-Addo, made the announcement at the Jubilee House as he addressed the Rugby team and their management when they paid a courtesy call on him.

“I want to encourage you to do as much as you can”. “Our our mother here, who looks after all of us at the Presidency, the Chief of Staff, she is saying that from her very limited budget, she is going to be able to find a reasonable amount of seed money to help you. She has asked me to tell you that she is going to make available to you hundred thousand United States Dollars” President Akufo-Addo said.

President Akufo-Addo commended the Management of the Ghana Rugby Team for opening up the game to all manner of persons and not only for the elite or the well to do in society.

“I like the idea also that you open the doors of Rugby to all people and not just to people going to privilege schools, etc, but everybody having access to the sports is very encouraging and I think it is something you should be encouraged for” President Akufo-Addo stated.

Board Chairman and President of the Ghana Rugby Football Union, Herbert Mensah, in his remarks thanked the President for making time to meet the team and to give them State recognition. He indicated that the Ghana Rugby team has achieved several successes that essentially makes them the most successful team sport in Ghana the last four years.

“We have won the West African One D, we have won the bronze cup in which we defeated Mauritius. We also in 2019, the ladies for the first time ever went to Tunisia and for some, it was the first time and they won the Channel trophy beating Zambia who are highly ranked in the final. The men at the third time then went to South Africa and also won the challenge trophy. So during your tenure you Excellency, we have been able to win the four trophies” Herbert Mensah said.

In his address, Mr. Mensah, suggested that the managers of Ghana’s education system should consider adding Rugby to the curriculum of the country’s educational system.

“It will not cost money but it will mean that every time we approach a school, they will not say we cannot move without a letter from the Ghana Education Service” Mr. Mensah said.

The Ghana national Rugby Union Team represents Ghana in international rugby union. Ghana are a member of the International Rugby Board (IRB), and as of 2019 had not played in a Rugby World Cup tournament. Ghana played their first international game during the 2003 season, and defeated Mauritania by 29 points to 8. Since then there have been a number of youth teams in Ghana; the under-18 team won a junior rugby competition. The National Team itself has hosted a tournament and had some credible results on the field. After its forming in 2005, the Ghana National Rugby Union Team has played in a number of competitions. The team was founded by a coach from Cameroon named Guy Chaley who recruited players, including coach Amuzu Salim, to play their first international match.