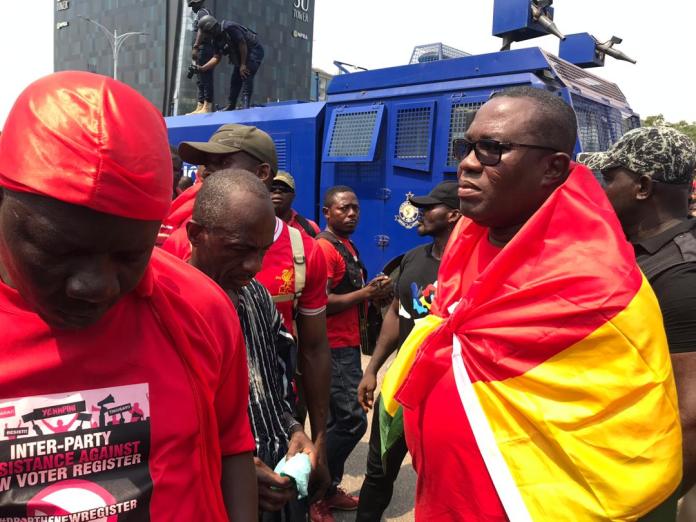 The opposition NDC wants the Inspector General of Police(IGP) to set a police enquiry into the alleged brutalities meted out to members of the Inter-Party Resistance Against New Voters’ register at the precinct of parliament House during the State of the Nation Address.

In a statement issued by the General Secretary of the party, Johnson Asiedu Nketiah condemned the act calling for immediate sanctions against officers culpable.

“The National Democratic Congress condemns in no uncertain terms, the barbaric and brutal treatment of innocent protesters who thronged to the streets near the Parliament House to picket in manifestation of their protest against the compilation of a new voter register ahead of the 2020 polls.

“The cruel and barbaric manner in which the police used unjustifiable force in an attempt to
suppress the constitutional rights of Ghanaians to protest peacefully, was totally
disproportionate and unwarranted. This callous application of force resulted in physical injuries to some of the protesters including our Deputy General Secretary in charge of Operations, Mr. Peter Boamah Otokunor.”

The statement also berated President Akufo-Addo’s for what it says is the blatant disregard for the recommendation by the Emile Short Commission for the disbandment of armed units operating under the ambit of national security(SWAT/National Security Operatives).

“President Akufo -Addo found it necessary to deploy them in the august house of Parliament in an unprecedented display of force, to instill fear into those who disagree with him. We in the NDC have an equal  stake in this country, just as any other Ghanaian, and will never be cowed into submission by such crude tactics.”

Meanwhile, the statement has lauded the efforts of the minority for their bold action to stage a walkout in support of the resistance against the new voter register.