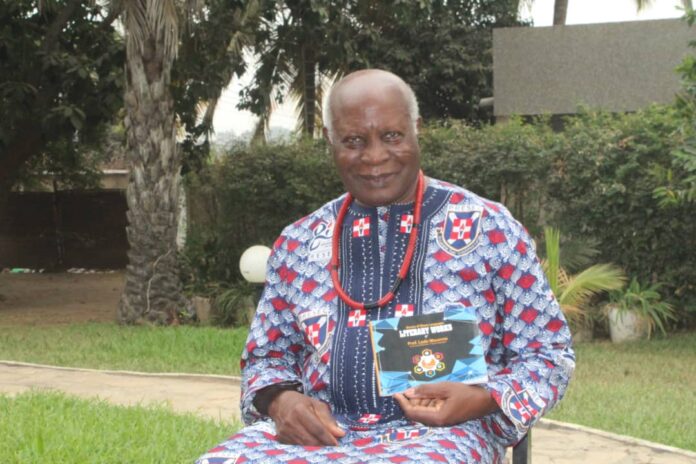 Sanegbaa is an annual Ghanaian Languages festival created by the Bureau of Ghana Languages to commemorate the UNESCO International Mother Language Day.

With a successful history, the Bureau of Ghana Languages is prepared to present yet another outstanding festival this year.

One of the outstanding segment of this year’s edition among many is the launch of a book (of translated poems of Prof. Lade Wosornu into 11 studied Ghanaian Languages).

The poems which include Prof Lade Wosornu’s popular poems as Desert Rivers and TheMaster Brewer and the recently WAEC selected Raider of the Treasure Trovehave been translated into Ga, Dangme, Ewe, Nfantse, Ashanti Twi, Akuapem Twi, Dagaare, Dagbani, Nzema…and is the first of the Bureau of Ghana’s Languages’ Literary Legends’ Works Translation Project geared at translating literary works of great Ghanaian authors into as many Ghanaian languages as possible and also used as a means of promoting multilingualism. Prof. Lade Wosornu is a retired surgeon, poet and an essayist.

Aside from the launch gathered information indicates that the 2020 Sanegbaa promises to be bigger and better than last year’s. Like last year, the festival is again designed to begin with screening of films well produced in the Ghanaian languages.

This will be followed up with a Master class by the ace actor and Chairman of Ghana Film Authority, Mr. David Dontoh, on the topic “Effective Use of Ghanaian Languages in Ghanaian movies”.

The Special Guest of Honour for the2020 Sanegbaa will be Hon. Barbara Oteng-Gyasi (Minister for Tourism, Arts & Culture) while Mr. Abdourahamane Diallo (Head of Accra UNESCO Office) be the Chairperson and Nana Kwasi Gyan-Apenteng (former President of Ghana Association of Writers, former Chairman of National Media Commission and currently Chairman for the Pan African Writers Association Steering Committee), the Keynote Speaker. Other dignitaries who will be at the festival include Hon. Dr Ziblim Idi (Deputy Minister for the Ministry of Tourism, Arts and Culture), Mrs Ama Serwaa Nerquaye-Tetteh (Secretary-General of the Ghana Commission for UNESCO), Mr Ernest Boateng (Board Chairman of the Bureau of Ghana Languages), Prof Kofi Anyidoho (Poet/Senior Lecturer, University of Ghana), Dr Clement Appah (Senior Lecturer, Linguistics Department, University of Ghana), Prof Lade Wosornu (Poet and retired Surgeon), Prof. Kofi Agyekum(Head of School of Performing Arts and Ghanaian Languages Activist), Dr. Samuel Awinkene Atintono (Principal of Accra College of Education) among others.

Performances for the day will include drama by the Obra Akan Drama group, poetry performances by different spoken word artistes, storytelling, puppetry, cultural dance performances among others. The venue for the festival remains the premises of the Bureau of Ghana Languages behind the 37 Military Hospital, Kawukudi, time, 10:30 am and date, Friday, 21 February 2020. Entry is free. Supporters of this year’s edition are the Ghana Commission for UNESCO and Yumvita. For more information one can contact +233 244 174 908 or +233 571 174 908.

SANEGBAA 2020: A Festival Of Arts & Acts In Diverse Ghanaian Languages

Prof. Awoonor’s Birthday to be marked on March 13