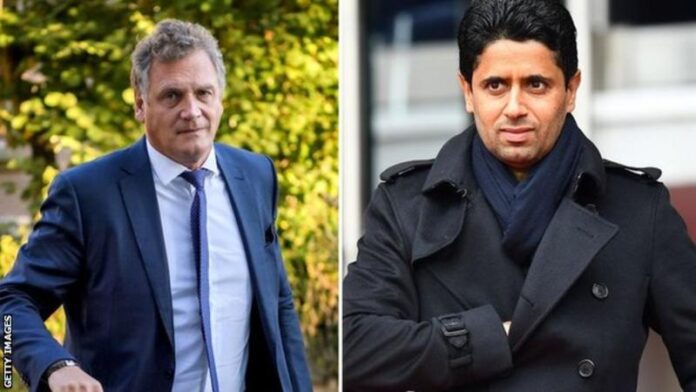 Paris St-Germain president Nasser Al-Khelaifi has been charged by Swiss prosecutors following an investigation into the awarding of media rights for Fifa tournaments.

Al-Khelaifi is accused of inciting criminal mismanagement in connection with allegations Jerome Valcke “exploited his position” as Fifa general secretary.

Valcke is charged with accepting bribes, criminal mismanagement and falsification of documents.

It is alleged he accepted “undue advantages” in exchange for TV rights.

Switzerland’s attorney general announced on Thursday that charges had been brought against Valcke, Al-Khelaifi and a third businessman over rights for various World Cup and Confederations Cup tournaments between 2018 and 2030.

Valcke is accused of accepting rent-free accommodation in an Italian villa bought by Al-Khelaifi, who is chairman of the BeIN media group.

The charges relate to Valcke’s time as Fifa general secretary between 2013 and 2015 when he is accused of influencing the award of media rights for Italy and Greece.

A further bribery complaint against Al-Khelaifi has been dropped after Fifa reached an “amicable agreement” with the Qatari businessman at the end of January, the statement added.

Those allegations were in connection with the award of media rights for the World Cup tournaments in 2026 and 2030.

Al-Khelaifi, 45, joined Uefa’s executive committee in February after being elected by the European Club Association (ECA) to be one of its two Uefa delegates in January.

Neymar out for ‘six to eight weeks’