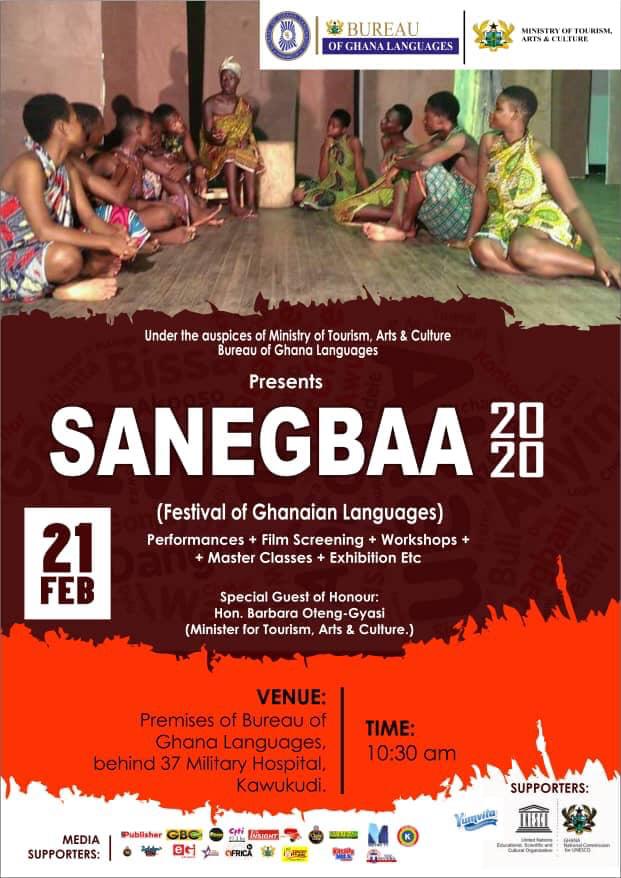 Sanegbaa, an annual Ghanaian Languages festival created by the Bureau of Ghana Languages to commemorate the UNESCO International Mother Language Day, took everyone by surprise when it held hundreds of people—diplomats, foreigners, students and government officials— from morning till evening in diverse activities ranging from film screening, workshops, a seminar, conversations, traditional games, honouring ceremony to performances last year.

The festival also saw the re-invention of the good old days as various traditional games in different Ghanaian languages were played.

This year, another edition is set to take place to commemorate the 2020 UNESCO International Mother Language Day and, it promises to be bigger and better; like it was last year, the festival is set to begin with screening of films well produced in the Ghanaian languages. 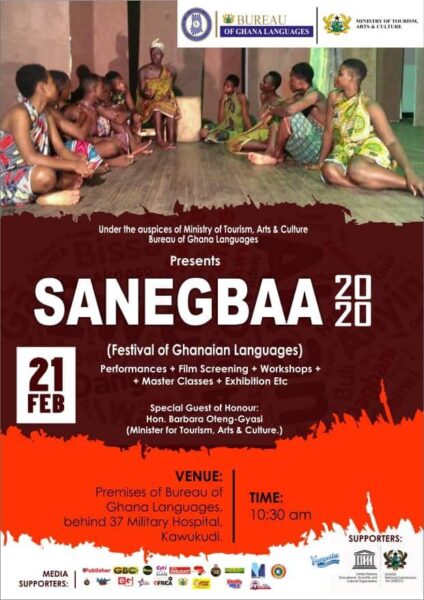 This will be followed up with a Master class by the ace actor and Chairman of Ghana Film Authority, Mr. David Dontoh, on the topic “Effective Use of Ghanaian Languages in Ghanaian movies”.Again, the festival will host participants in different traditional games, folk tales, folk music, riddle & proverb contest, exhibition/sales of materials produced in the Ghanaian languages, workshops on how to write and read in the Ghanaian languages, launch of a book (of translated poems of Prof. Lade Wosornu into 13 Ghanaian Languages) and a grand conversation.

The Special Guest of Honour for the day will be Hon. Barbara Oteng-Gyasi (Minister for Tourism, Arts & Culture) while Mr. Abdourahamane Diallo (Head of Accra UNESCO Office) be the Chairperson and Nana Kwasi Gyan-Apenteng (former President of Ghana Association of Writers, former Chairman of National Media Commission and currently Chairman for the Pan African Writers Association Steering Committee), the Keynote Speaker.

Performances for the day will include drama by the Obra Akan Drama group, poetry performances by different spoken word artistes, storytelling, puppetry, cultural dance performances among others.

The venue for the festival remains the premises of the Bureau of Ghana Languages behind the 37 Military Hospital, Kawukudi, time, 10:30 am and date, Friday, 21 February 2020. Entry is free. Supporters of this year’s edition are the Ghana National Commission for UNESCO and Yumvita. For more information, one can contact +233 244 174 908.