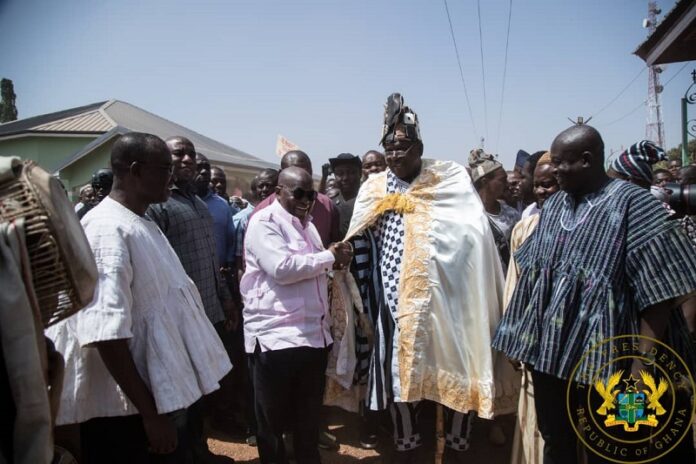 These were the words of the President of the Republic, Nana Addo Dankwa Akufo-Addo, on Monday, 3rd February, 2020, when he addressed a durbar of Chiefs and people at Kpalbe, in the Salaga North constituency, as part of his working visit to that region.

Recounting the events leading up to the December 2016 elections, President Akufo-Addo noted that then-President Mahama had touted his achievements in the delivery of infrastructure as “unprecedented”.

“When I said I had not seen this unprecedented infrastructural development, he (President Mahama) said it was because I was sleeping in my car, the reason why I was not seeing any of it,” the President said.

He continued, “When I became President, everywhere I went, the first thing that the chiefs will ask me is for the roads. So, it became obvious that we have not seen any unprecedented infrastructural development. It was not true, especially in his (Mahama’s) own home region, because this is where some of the worst roads in Ghana are; in his own backyard in the Savannah Region.”

With Government undertaking the construction of the 138 kilometre Tamale to Makango Road, and the construction of the 120 kilometre Binjai-Fufulso road, President Akufo-Addo stressed that “the road network that is being worked on will come to pass. It will not be in the green book, or in the mouth of the President, but on the ground for all to see.”

Touching on other flagship projects of his administration, the President expressed his delight that “our policies such as Free SHS, Planting for Food and Jobs, 1-Village-1-Dam, Rearing for Food and Jobs are going down well with the people of the district. We will continue to do more.”

He assured the Chiefs and people of North East Gonja district that their request for the construction of a district hospital and a senior high school will be addressed, adding that “it is a high priority of this government that we put in place the infrastructure for the new regions.”

On the provision of water, President Akufo-Addo assured that the Ministry for Special Development Initiative’s programme of constructing small water systems in all parts of the country will be extended to the North East Gonja district as well.