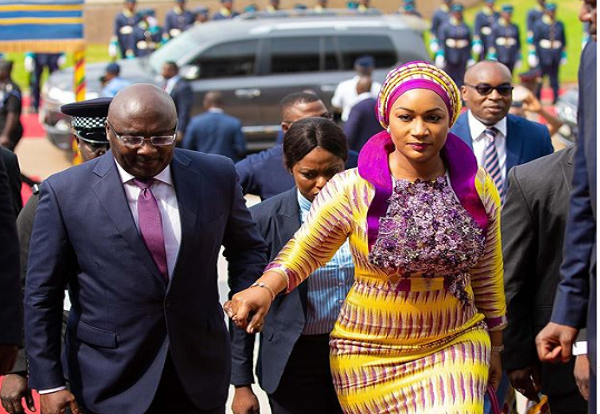 Second Lady Samira Bawumia believes her husband Vice President Dr. Mahamudu has elevated the political discourse in Ghana with the issue-based politics he does.

Veep Dr. Bawumia while in opposition in the runup to the 2016 general elections was described by many political watchers as a thorn in the flesh of the then ruling National Democratic Congress(NDC) with his economic criticism and diagnoses of the economy.

He gave a series of lectures on the economy where he took on the John Mahama led administration over their management of the economy.

Speaking in an interview on Asempa FM monitored by Kasapafmonline.com the Second Lady condemned politics of insult and urged the electorates to demand that politicians at all times do politics of issues and introduce policies that will improve the lives of the ordinary Ghanaian.

This was after she was asked how she feels when she hears her husband’s political opponents insulting him.

“I think what the Vice President has successfully done if I may say so myself is that he’s elevated the political discourse in this country to facts and issue-based politics. And so I wish that we as electorates or voters should demand from every politician to do what is in our interest which is to put their policies forward. If the man says inflation is 7.8% and you insult him how does that make you more attractive to the voter? So we should collectively tell our politicians that, that is not what politics should be about.”

She added: “If you have genuine criticisms why not, if you have issues with what he says why not, let’s discuss it but it really shouldn’t be about insults. When someone starts insulting, for me, it’s telling on who they are. It tells me that they have no alternative solution. If you have facts and something good to say you won’t resort to insults.”