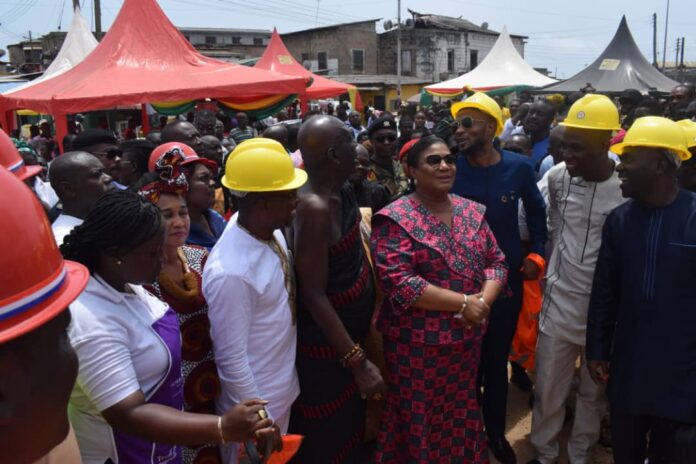 The new market to be located at Anaafo near the Cape Coast Castle will ease the pressure on market women who struggle for selling spaces in the old market.

The old Anaafo market which served the fishmongers and other market women mainly from the adjoining fishing communities was not only congested but declared architecturally weak to support continuous trading activities.

The new market which will be a two storey facility with 260 lockable stores, offices, cafeteria and other ancillary facilities is set to be completed within  12 months. 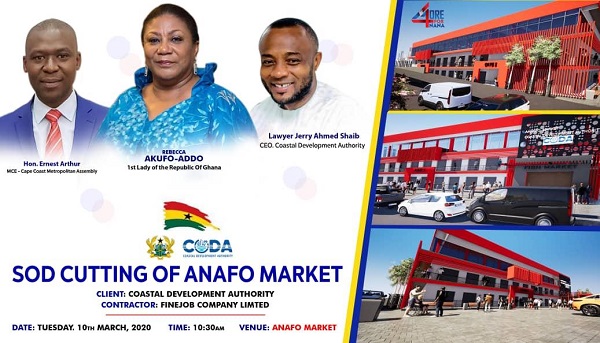 The project forms part of the Infrastructural Improvement for Poverty Eradication Programme(IPEP) which is in line with the 1million per constituency project promised by the New Patriotic Party and its leader Nana Akufo-Addo in the run-up to the 2016 general elections.

She urged the contractor for the project, Fine Link Construction Limited as well as the project implementers which is the Coastal Development Authority(CoDA) and the Cape Coast Metropolitan Assembly to expedite work at the site so that the market women will have a decent place to go about their economic activities.

Mrs. Rebecca Akufo-Addo also pledged the commitment of government in doing more to improve living conditions for generality of Ghanaians.

She explained that programmes like Free Senior High School, health promotions, infrastructural works among others implemented by government point to the intent of government in ensuring qualitative improvement in the lives of the people .

She indicated that Her outfit , the Rebecca Foundation is also committed to helping in addressing some of the challenges facing women and children in the country so that such category of people could also enjoy decent livelihood.

She appealed to them to make good use of the donation so that they become beneficial in improving their economic wellbeing.

In a related development, the Chief Executive Officer for the Coastal Development Authority(CoDA) Chief Ahmed Saib Jerry has indicated that 5,000 outboard motors have been procured to boost the activities of fishermen in the country which the fisher folks in the central region will not be left out.

He also indicated that a microfinance scheme has been initiated to provide support to taxi drivers, fishermen and the fishmongers in the country so as to boost their trade.

He, however, appealed to prospective beneficiaries of the loan scheme to make prompt repayment so that the scheme could be sustained to benefit more people.

First Lady calls for economic empowerment of women and Girls

Let’s rise up and do more – First Lady charges women