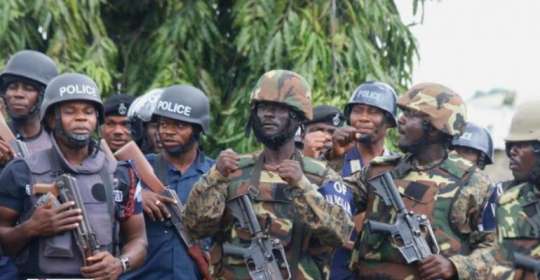 The joint Police/Military task force set up to enforce the lockdown of Accra and Kumasi metropolitan areas has assured that no member of the public will be intimidated during the impending exercise.

According to DCOP Dr. Gariba, Director of Police Operations who spoke on behalf of the Taskforce at a press conference in Accra on Sunday, their actions will be taken with the mindset of a humanitarian operation and not a war.

His comments come after a widely circulated video of soldiers in which a voice is heard warning the public that soldiers deployed to areas affected by the lockdown will assault anybody who will flout the directives on the lockdown.

DCOP Dr. Gariba stated that the Security taskforce requires the total support of the public to make the exercise successful and incident-free.No

“Our task is to enforce the restrictions outlined by his Excellency the President. We look at this operation as a humanitarian operation, it is not a war. We are all fighting the coronavirus so we need support from the population to be able to do that. We are not going to intimidate anybody, we are rather going to support the Ghana Health Service to be able to fight this pandemic and achieve the overall objective of his Excellency the President of the Republic of Ghana.”

DCOP Dr. Gariba disclosed that there’ll be roadblocks of some major roads in Accra and Kumasi as well as undertake outer and inner cordons in these areas to achieve to get the maximum effect.

President Akufo-Addo last Friday announced a lockdown in Accra and Kumasi Metropolis following a spike in cases of the covid-19 pandemic.

The directive will affect Accra, Kumasi, Tema, Kasoa among others, declared by the Ghana Health Service(GHS) as the hotspots of the pandemic in the country.

Meanwhile, essential workers have been exempted from the temporary measures announced by the President as the lockdown takes effect Monday dawn.

Ghana’s confirmed cases have scaled up to 152 with four deaths.

Below is a summary of the Restrictions Imposed on Selected Areas in Ghana by Government for 2 weeks.