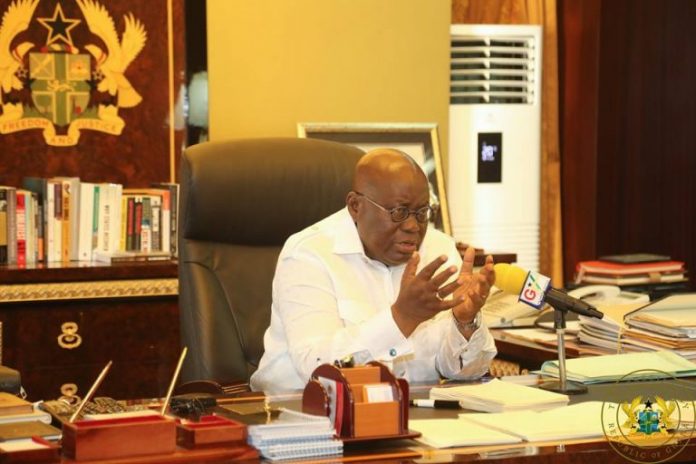 President Akufo Addo has announced the shut down of all educational institutions – universities, second cycle schools and basic schools effective, March 16, 2020 until further notice in the wake of the outbreak of the deadly COVID-19.

However, BECE and WASSCE candidates will be allowed to prepare for their examination under prescribed social distancing protocols.

All public gatherings, including conferences, workshops, funerals, political rallies, sporting events, such as services in churches and mosques have been suspended for the next four weeks.

Private burials are however permitted but with limited numbers not exceeding 25 people in attendance.

He reiterated that travel bans announced are still in force.

Ghana has so far recorded six cases of the Coronavirus (COVID 19).

The Director of Public Health at Ghana Health Service, Dr. Badu Sarkodie on Sunday afternoon announced that four more cases had been recorded in addition to the two earlier reported.

According to him, three of the cases were recorded in Accra while one other was recorded in the Ashanti Region.

Dr Badu-Sarkodie said of the additional four confirmed cases, the first had to do with a 56-year-old Ghanaian who returned from a trip in the United Kingdom on March 4, 2020.

“He stayed in the UK for 10 days. He developed symptoms on the 12th of March and reported to a health facility in Obuasi. Samples were taken from him and taken to the Kumasi Center for Collaborative Research and the results returned positive”, said Dr. Sarkodie.

The second, he noted, is a woman, and a student.

According to him, the said woman traveled to the United States of America, stayed there for about 10 days and returned to Ghana on the 10th of March.

The symptoms, he added, began showing on March 13, 2020 which was later confirmed to be suspected COVID-19.

The fifth and sixth cases, he added, were recorded on Saturday, late in the afternoon, from the Noguchi Memorial Medical Research.

According to Dr. Sarkodie, the first is a 42-year-old Ghanaian male who returned to Ghana on March 8, 2020.

He had traveled to Switzerland and the UK in the past 14 days.

“Symptoms started on March 13, 2020 and he reported to the health facility on March 14. After samples were tested, it was confirmed positive. The second case in this batch was a 41-year-old Ghanaian male. He reported to the Tema General Hospital on the 14th of March with fever and acute respiratory illness. He had traveled to Turkey and Germany within the past 14 days. Results from Noguchi came back positive. Both cases had no symptoms on arrival”, Dr. Sarkodie explained.

Following the recorded cases in Ghana, the government has intensified traveling restrictions to and out of the country.

According to the Minister of Information, Kojo Oppong Nkrumah travelers from countries with more than 200 confirmed cases have been banned from entering Ghana.

He disclosed that all new travelers into the country henceforth shall undergo 14 days mandatory quarantine.