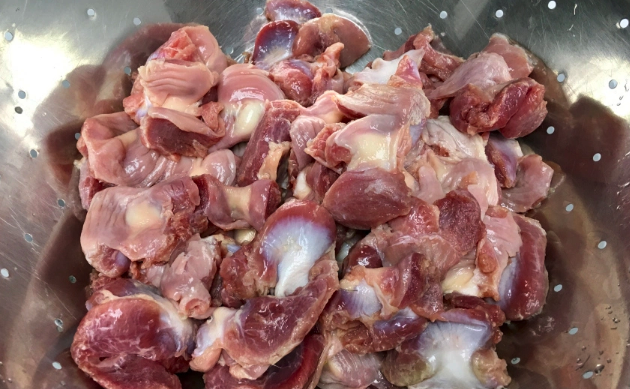 In a news item, titled “Salmonella gizzard scare: Cook it there’s nothing to fear – FDA”, that appeared on the 18th February, 2020, in the media, the Head of Corporate Affairs, at Ghana Food and Drug Authority (FDA), is reported to have stated that cooking of the infected gizzard, thoroughly, would kill the bacteria: “This gizzard, if you cook it, whatever bacteria you are talking about is nullified through the heat. So, in actual fact, this is not something that we should even be worried about”.

Usually, bacteria need to gain access into the blood stream and multiply and circulate and release toxins in the circulating blood.

In this case with cooked contaminated meat, salmonella is dead; but, the toxins are still active; and, when ingested, they may cause some of the problems made mention of earlier.

However, this author would want to posit that, thorough cooking can kill salmonella; but, when veterinary health officials warn people not to eat potentially- contaminated meat, or when a meat is recalled because of salmonella risk, that means do not eat that food, cooked or not, rinsed or not because the stakes are too high.

Subsequently, in a televised program on the topic: WHO LET THE GIZZARD OUT; A Case of Poor Gate-keeping or Institutional Malaise on some TV stations on the 23rd of February 2020, involving tripartite discussants: one representative each from the FDA, the Veterinary Services Directorate (VSD) and the Ghana Revenue Authority (GRA) Customs, respectively.

These discussions arose amid reports that 3 containers of Salmonella-infected gizzards were allowed into the market in the country. During the TV discussion the following facts emerged:

There were 2 different importers for four containers; but, one supplier from Brazil. Importer A had the first 3 containers; importer B had the fourth (seized) container.

Importer B received an alert from the Brazilian supplier about salmonella contamination, before VSD received their alert.

Subsequently, VSD wrote to the National Security and Ghana Ports and Harbours (GPAH) on 5th of April 2019 to block the 4th container, that is, after receiving a confirmation letter, on the 3rd of April 2019, from the Brazilian Embassy.

WHO let the Salmonella-contaminated gizzards out?

This was corroborated by the representative of FDA during the tripartite TV discussion on 23rd February 2020. The FDA issued Export Certificates at the point of Entry and were refused. At that stage, the FDA had to go back to the VSD, but they did not.

VSD removed from the joint inspection team, since July 2018

It is worthy of note that VSD has not been part of the joint inspection team that included FDA an GRA, since July 2018. FDA only invites the VSD only when there are exceptional cases the FDA felt they could not handle on their own.

Seizure of the 4th container

Final clarification on the unwholesomeness of the gizzards in the 4th container got to the VSD authorities, from the Brazilian embassy, on the 3rd of April 2019. VSD then wrote to and copied the following agencies to block the containers involved, based on reply from the Brazilian Embassy: GPHA; GRA; and Head of National Security; Director of VSD.

Chronology and dynamics of additional alerts on the 4th container

From the TV discussion, the discussant from the GRA confirmed the following:

1. By 19 February, 2019, the importer had paid for the goods to be cleared, and it was, at that time that he got the alert from the SUPPLIER and decided not to go ahead with it;
2. GRA received the alert on the 4th container from the SUPPLIER at that same time, and failed to alert the FDA and others about it? 3. Since the FDA was aware of this alert at this time, why did the FDA not recall the meat for the 4th container immediately? Moreover, this was long before the VSD, on the 3rd of April 2019, got the final confirmatory alert from the Brazilian Embassy.

Best practice stipulates that It is an offence to import any animal and animal product, without a veterinary import permit from VSD.

And so, here the FDA and the importer did commit an offence. Import permits are issued, based on the disease conditions, pertaining in the exporting country. In the past (up until July 2018), when VSD was part of the joint inspection process, the procedure was as follows:

1. The importer applies to the Minister of Food and Agriculture to import animal product
2. The Minister refers the application to the Director of VSD for advice.
3. VSD Director writes to the Minister to recommend approval or not.
4. The Minister then gives the final approval or disapproval
5. When approval is given, then importer now brings it to the VSD.
6. They pay the relevant fees and charges at the VSD.
7. After payment the VSD will start the clearing process by entering the information electronically on the clearing platform, where other agencies will get the full information from MOFA/VSD.

The Author of this article, Dr. Alfred Adjiri-Awere, is a Comparative Pathologist in Canada and Ghana.

Camphor is Insecticide; Don’t use for treatment of Covid-19 – FDA warns