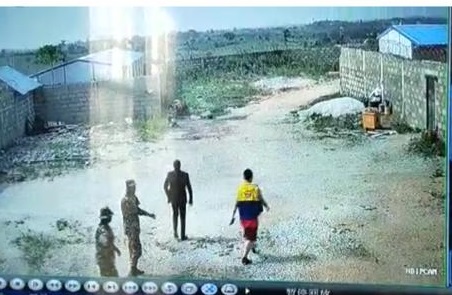 The soldiers and civilians who allegedly robbed some quarries at Gomoa Ojobi in the Central region last week used the official vehicle of the colonel in charge of the military at the Jubilee House.

According to the Kasoa Divisional Commander ASP Innocent Agbanyo who led the operation that effected the arrests, the head of the military at the Jubilee House has confirmed that the vehicle belongs to him but denies sanctioning the operations.

“When we arrested them they said they were from the Jubilee House and they were acting on intelligence and so we got in touch with their head there. In fact, the vehicle they used belongs to the Colonel in charge of the military at the Jubilee House but he says he has no knowledge of the operation and so the matter has been handed over to the police headquarters,” ASP Agbanyo told Starrfm.com.gh Monday.

He said the matter has been taken over by the police headquarters and the civilian suspects are in custody while the military police is detaining the military suspects.

Another highly placed Police source told Starrfm.com.gh that the matter is being taken seriously by the police since the suspects claimed they were acting on behalf of the GRA.

The various state agencies they claimed to be working for have denied knowledge of the operation, the Police source said.

She said the manager of the Executive Stone Quarry reported to the Ojobi District Police Command that four military men armed with guns in the accompany of five civilians on board two Toyota Land Cruisers and a Pajaro came to their quarry site and robbed them of a cash of GH¢ 10,000, (1) IBM laptop computer, (1) HP Laptop computer, System units, (1) Money counting machine, (1) receipt printer and (2) security camera decoders, all valued at about GH¢20,000.

The management of the affected quarries are writing their statements at the Millennium Divisional Police Command.

An amount of GH¢27,810 was retrieved from the suspects after they had been searched.

A fortnight ago, one of the quarries was robbed and their engineers killed and a worker injured.

The Customer Relations Officer for one of the companies, HaoXin Stone Quarry at Awutu Ofaakor, Frederick Denyo, said the company lost GH¢55,000 to the robbers. – Starrfm.com.gh