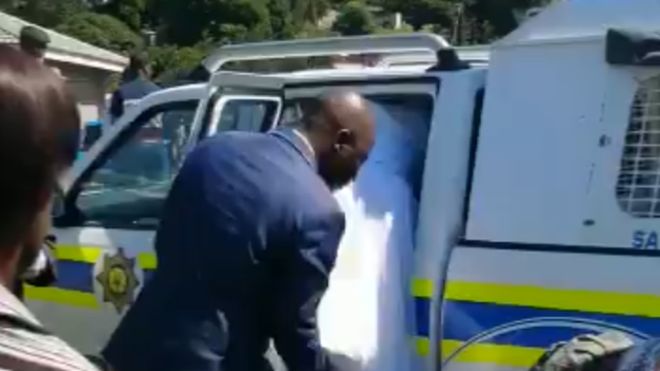 Married life got off to an unexpected start for a pair of newlyweds in South Africa when police showed up to the party.

They had received a tip-off that the wedding in KwaZulu-Natal was happening on Sunday despite a nationwide ban on all public gatherings because of coronavirus.

All 40 wedding guests, the pastor who conducted the ceremony, and the newlyweds themselves were promptly arrested and taken to a police station outside Richards Bay.

The whole group is to be charged in court on Monday.

Widely circulated videos show the moment the besuited groom helps his wife into the back of a police van in her white wedding dress, complete with train and veil:

A couple arrested on their wedding day at Nseleni in KwaZulu-Natal for violating the lockdown rules and regulations as they decided not to postpone their big day 1 pic.twitter.com/lyWCpaTUT0

The couple have not yet been named by police or local media.

South Africa, which has 1,655 confirmed cases of coronavirus, including 11 deaths, is now in the second week of one of the world’s strictest lockdowns.

It has seen mobile testing units as well as drive-through testing centres being rolled out. Soon the country will be able to test 30,000 people every day.

Nothing but essential movement is permitted, and there is even a ban on buying alcohol and cigarettes.

Correspondents say South Africa’s response to the pandemic has been ruthlessly efficient.

The lockdown has been imposed for an initial period of three weeks.