His Lordship the Chief Justice, Justice Anin Yeboah has directed all Court Registrars to discontinue the appointment of the suspended ruling New Patriotic Party(NPP) Central Regional Vice Chairman Ekow Ewusi as an auctioneer.

According to the Chief Justice, the embattled politician who is the CEO of Coastal Mart does not have a valid license to practice as an auctioneer in Ghana.

A statement signed by the Judicial Secretary copied to all Registrars of Courts and sighted by Kasapafmonline.com said: “this directive takes immediate effect.” 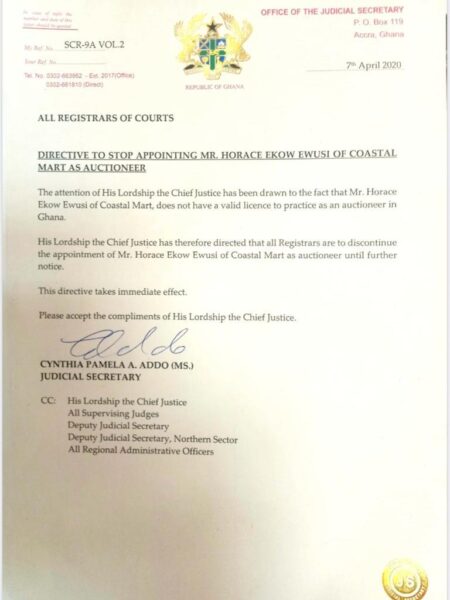 Mr. Ewusi reportedly had been operating with a fictitious auctioneering license.

Mr Ewusi in February 2020, was arrested by officers of the CID over missing excavators seized in the clampdown on illegal mining (galamsey).

He’s believed to have auctioned several of the missing excavators and other equipment seized from illegal mining operators.

The arrest followed a request made to the CID by the Minister of Environment, Science and Technology, Professor Kwabena Frimpong Boateng.

According to the letter written by the Minister, Mr Ewusi was contracted to cart excavators and pieces of equipment seized by Operation Vanguard to designated areas for safekeeping.

The Minister’s letter said the Ministry had received information that he sent an unknown number of equipment to an unauthorized location including one in Tema.

It further said, “Information reaching me indicates that he has sold an unknown number of the pieces of equipment including excavators.”