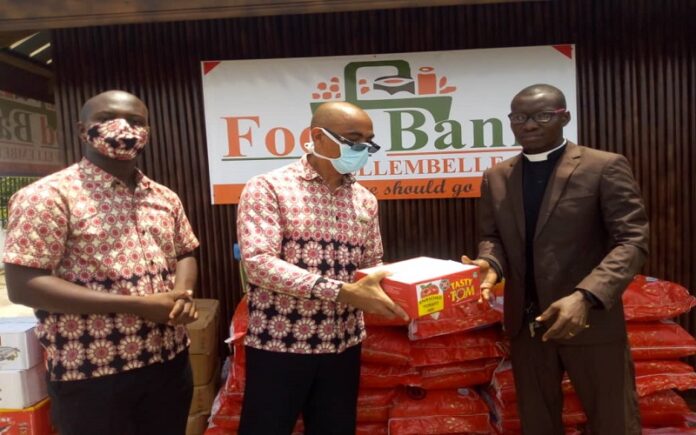 The plush Maaha Beach Resort has donated some food items to the Food Bank of Ellembelle to assist its drive in eliminating hunger from the Nzema communities in the Western Region.

Among the items are 30 bags of rice, boxes containing cubes of sugar, boxes of mackerel in tomato sauce, five boxes of frytol cooking oil, and six boxes of tasty tom enriched tomato mix.

The Director of Operations, Maaha Beach Resort, Jean-Jacques Mass, told journalists moments after presenting the food items on behalf of the company on Saturday, April 25, 2020, that the company was inspired by the reason behind the establishment of the Food Bank for Ellembelle.

According to him, Maaha Beach Resort has all along remained committed to impacting positively on the lives of people living on Nzema land and beyond and will continue to associate itself with projects that have such motives no matter how small or big it is.

“This donation was inspired by a leader who saw that this is the right time to act. And because we know what is going on, this is the best way to bring a solution to something we can see will happen soon. It’s not just to be pessimistic, but the whole world is talking about something that I don’t think it should be the best for people to keep on mentioning but we have to react and give solution to what is coming on in front of us. We have committed ourselves to help and will continue to help”, he noted.

On Friday, April 24, 2020, the Member of Parliament for Ellembelle, Hon. Emmanuel Armah-Kofi Boah, launched an ambitious project that seeks to provide food for all, especially, the poor and other vulnerable people in society.

Known as the “Food Bank of Ellembelle”, the project will on daily basis, through a mobile food van, serve the poor and other vulnerable groupings in the constituency with raw food products and cooked or hot meals.

Those living around the AYA Community Center, a center that houses the Food Bank (a food storage facility with two attendants), could also walk to the facility and make a request for food at any given time of the day. The initiative is seeking to eliminate hunger from the constituency by 2024.

The project will be managed by an eleven-member committee, an independent body that is made of members from the Clergy, traditional rulers, district assembly representatives and the Muslim Community.
The project was inspired by the worrying numbers of identifiable vulnerable and disadvantaged groups in the district.

The Ellembelle District has about 1,500 vulnerable and disadvantaged groups that needed support.

It was based on this worrying situation, that Maaha Beach Resort is committed to turn around that motivated its donation to the Food Bank, according to Mass.

A member of the Committee tasked to manage the Food Bank, Rev. Father Castro Adiabaah, who received the items on behalf of the group, expressed appreciation to the CEO of Maaha Beach Resort, Mr. Frank Boah, for donating to the Food Bank “to enable us feed the hungry in the district”.

He assured that the items brought will be distributed equitably to the needy.

He appealed to corporate bodies, individuals, and churches to “support this vision of our Member of Parliament which is being implemented by the frontline church partners and all the stakeholders involved”.