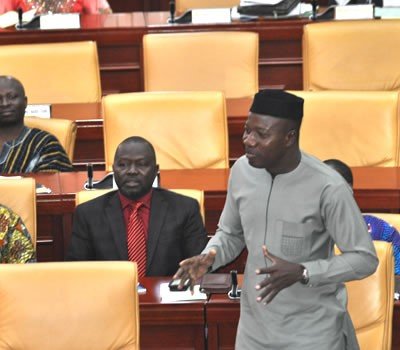 Member of Parliament for Bawku Central, Mr Mahama Ayariga, is fighting for an opportunity in the House to advance his arguments for the outright rejection of the the Public Elections (Amendment) Regulations 2020 CI 126.

Speaking on Anopa Kasapa on Kasapa 102.5 FM, Mahama Ayariga challenged his colleagues on the other side of the aisle to a debate asking the majority to allow the motion to go through unhindered, and see which arguments serve the better interest of Ghana.

“Why are you afraid of a debate? after all that’s what you are paid to do, Mahama Ayariga said, claiming that the majority is desperately seeking to shoot down the motion because they contend he[Ayariga] cannot gather two-thirds majority to enable him block the new constitutional Instrument laid before parliament.

He reiterated” let the motion be moved. Let me speak my nonsense, let you also speak your nonsense, and let Ghanaians decide of the two which one is the worst nonsense. Or let me come and speak my wisdom, you too come and speak your wisdom and let Ghanaians be the judge. I think it doesn’t serve democracy that the majority will try to block the motion”

The Minority has tabled a motion in Parliament calling for the rejection of the new Constitutional Instrument (CI) the Electoral Commission (EC) laid in Parliament to make Ghana Card and the Ghanaian passport the only legal identification documents for registering people in the new biometric voters’ register.

The motion was filed by the Bawku Central lawmaker, Mr Mahama Ayariga, on behalf of the Minority, seeking the two-thirds of legislators to reject the new C.I.

Following the filing of the motion on May 19, 2020, the Business Committee of Parliament will have to decide on a date Mr Ayariga will be allowed to move the motion on the floor to put up argument for the rejection of the C.I.

Subsequently, legislators from both sides of the House will be allowed to debate the motion and a vote taken.

If the majority of MPs (two-thirds) vote in favour of the motion, the Minority’s call for the new C.I. to be rejected would be sustained.

However, should majority of lawmakers kick against it, the motion will automatically need to go through the 21 continuous sitting days to mature and come into force.

Special Prosecutor not qualified to charge me – Mahama Ayariga