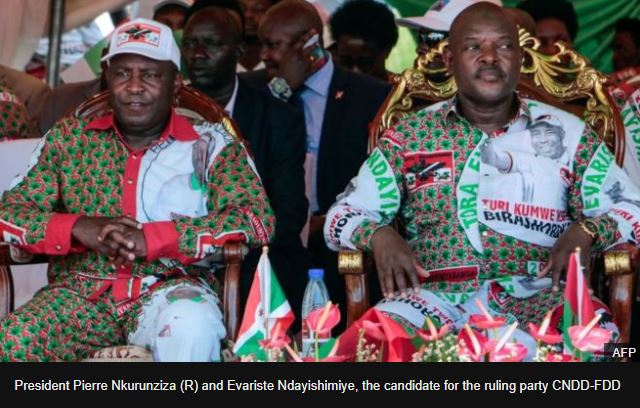 Only those using Virtual Private Networks (VPN), which mask a user’s identity, can access the social media sites.

The authorities have not responded to requests for comment.

Polling stations for the election opened early on Wednesday morning.

A local journalist has tweeted a photo of the turnout at one voting station:

The build-up to the poll – in which seven candidates are vying to replace President Nkurunziza – has been marred by violence and accusations that the vote will not be free and fair.

The electoral commission has approved representatives from 53 foreign embassies, including some from the African Union, as poll observers.

President Nkurunziza will be stepping down after 15 years but he will transition to a newly created position, “supreme guide to patriotism”.

Of the seven candidates contesting the presidency, Evariste Ndayishimiye, candidate for the governing CNDD-FDD party, and main opposition leader Agathon Rwasa, are seen as the favourites.

Whoever wins will be required by law to consult Mr Nkurunziza on matters of national security and national unity.

But the election has been criticised for taking place during the coronavirus pandemic.

Burundi has recorded more than 40 cases of coronavirus, with one death, but it has been criticised for holding mass rallies.

A government spokesman said in March, when no cases had been recorded, that the country had been protected by God.

The authorities have resisted imposing tough restrictions, only advising people to stick to strict hygiene rules and avoiding crowds wherever possible – except of course in campaign rallies.