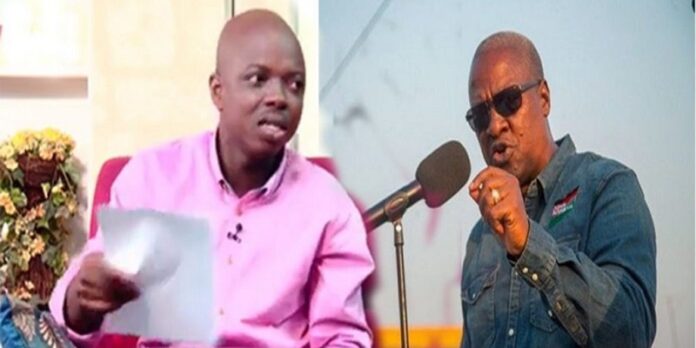 The Brong Ahafo Regional Chairman of the governing New Patriotic Party (NPP), Kwame Baffoe, popularly known as Abronye DC, today reported to the Criminal Investigations Department (CID) of the Ghana Police Service as it begins probe into alleged comments he made against ex-President John Dramani Mahama.

The NPP official was reportedly accompanied by his team of Lawyers to the CID headquarters today, after he failed to honour the invitation billed on Thursday.

Abronye DC’s invitation comes on the back of an official complaint lodged by former President, John Dramani Mahama over allegations of a planned assassination of some members of the New Patriotic Party (NPP).

The allegations were made on Net 2 TV.

“On the programme, Abronye DC announced to the general public that some NPP personalities would be assassinated by NDC hirelings who would be wearing NPP T-shirts, and that these hirelings would be doing the bidding of former President John Mahama,” the former leader’s counsel, Tony Lithur of Lithur Brew law firm letter of complaint to the CID read.

A video of the recording was attached to the letter, a copy of which was sent to the IGP.

The CID in turn responded by inviting Abronye to assist in investigations.