A District Court in Accra has granted a GHC100,000 bail to controversial pastor and founder of the International God’s Way Church, Bishop Daniel Obinim, after he was charged for publication of false news and forgery of a document.

A statement signed and issued by Director of Public Affairs of the Criminal Investigations Department (CID), Deputy Superintendent of Police Juliana Obeng said Bishop Obinim is being investigated for other offences.

There have been reports in the media that the pastor was arrested after maverick politician and Assin Central MP, Kennedy Agyapong filed a complaint against him.

The CID urged the public to disregard a video circulating on social media on the earlier reports of the arrest.

Bishop ‘Angel’ Obinim who claims he undertakes assignments with Angel Gabriel and Michael is expected to re-appear before the court on June 1, 2020. 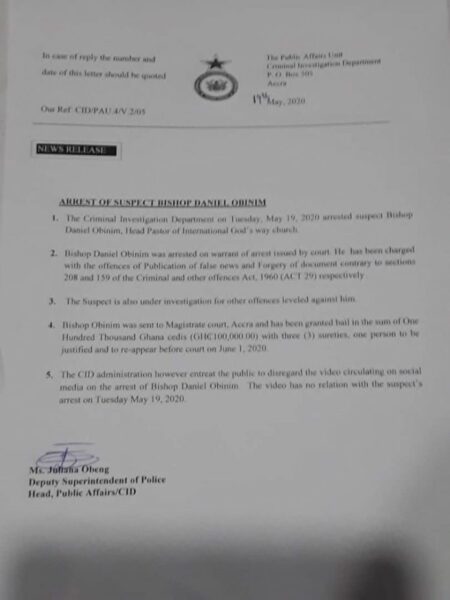