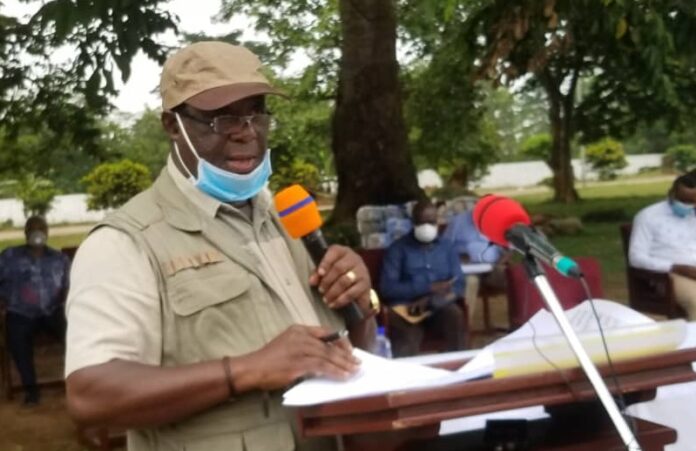 The Minister of Roads and Highways, Kwasi Amoako Atta, has expressed worry about the bad nature of the road network in the Ashanti Region.

However, he has assured that giving those bad roads a face-lift is one of the topmost priorities of the President of the Republic, Nana Addo Dankwa Akufo-Addo.

Addressing the media on Tuesday, May 5, 2020, as part of his two-working days tour to the Ashanti Region, Mr. Amoako Atta, said a total of 156 road projects being managed by different portfolio sectors, are currently ongoing in the Ashanti Region simultaneously.

Such road projects, he added, are at different completion stages, pledging that the well thought out projects will be completed to transform the beneficiary communities.

“We have 6,692 km unpaved. Out of this 3,475 of the roads are considered to be good. The remaining continue to be either fair or poor. Greater proportion still is poor. This is the situation of Ashanti Region roads. But I want to assure Kumasi and the people of Ashanti Region that a lot has been done by the President and the government for the past three years and we know that we still have a lot to do”, he noted.

Giving an overview of how the government is addressing the deplorable road network in the Ashanti Region, Mr. Amoako Atta, who is also the Member of Parliament (MP) for Atiwa West, said a total of 33 different road projects considered as cocoa roads are being undertaken under the COCOBOD Programme.

Further to that, a total of 74 road projects are being constructed under the Government of Ghana (GoG) while the Road Fund is also taking care of 42 road projects.

“His Excellency, the President has identified certain roads code named ‘Critical Roads’ and these have been identified in all the 16 regions and they were selected carefully during one of the government’s retreat at Senchi last year, represented by all the 16 Regional Ministers. So, these ‘Critical Roads’ were brought up by the Regional Ministers. We are also undertaking road construction under Sinohydro and also we are taking two road projects under development partners. So, if you put all of them together, as I speak to you now, a total of 156 different road projects being managed under different portfolio sectors in this regime are ongoing”, he explained.