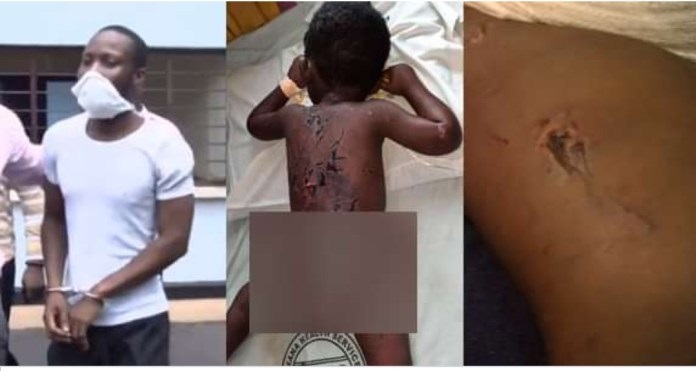 The Mother of the 3-year-old boy who was brutally assaulted by his father has rejected suggestions for the 26-year-old man to undergo a psychological assessment.

Family members of the abusive father, Ebenezer Nana Bonsu say they will be taking him to the hospital for a mental examination.

According to them, they recently noticed a strange behavioral change in him after he landed an employment opportunity and started interviews and presentations. They described him as a very academically bright quiet person who keeps to himself a lot.

But his baby mama, Sister Barbara in an interview with Agoo FM’s Ebenezer K. Nyavor believes the man has no psychological condition adding that he is a graduate who knows what is good and bad.

Ebenezer Nana Bonsu, disfigured the body of his son using a cane and a naked wire for bedwetting.

The boy lived with his mum until in April when she took him to spend time with his father and also celebrate his 3rd birthday.

The constant abuse the boy suffered in the hands of his father pushed a neighbor to alert his mother who came immediately to pick up her child. She and other neighbors were shocked to see what the man had done to the little boy

The man was arrested while the little boy was taken to the Manhyia Hospital in Kumasi where he is currently receiving treatment.

He was arraigned before a court in Kumasi on Thursday and has been granted bail by the presiding judge, Patricia Amponsah, to the tune of ¢30,000 with three sureties to be justified.