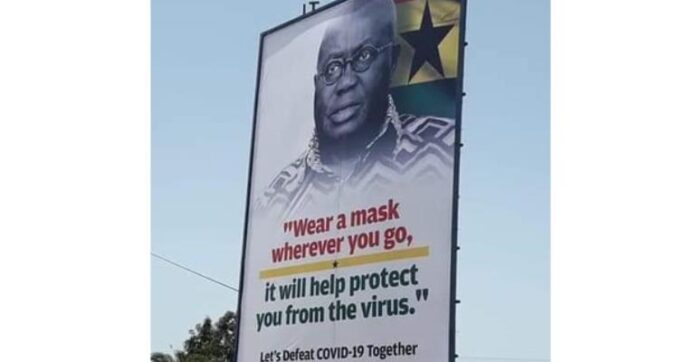 The General Secretary of the largest opposition National Democratic Congress(NDC) says the advertising agency that put up a mask-less picture of President Akufo Addo on billboards asking Ghanaians to wear a mask was spot on with the artwork.

The billboards which have sprung up in many parts of Accra advocating the need for mask-wearing as a measure in curbing COVID-19 show a giant image of the President without a mask.

The spectacle has provoked criticism on social media with many questioning the commitment of the government’s campaign against the virus.

The Government on Sunday directed city authorities to remove the COVID-19 awareness billboards that feature President Akufo-Addo without a mask.

However, in a tweet, Information Minister Kojo Oppong Nkrumah suggested the billboards are not sponsored by the government.

“We appreciate all who seek to help Govt communicate at this time. But pls do well to engage with Govt on imaging and messaging. This billboard of the President without a mask is not from Govt. Note that at his last public appearance the President wore his masks till his speech,’ he wrote.

But speaking in an interview with Kwaku Owusu Adjei on Anopa Kasapa on Kasapa FM, Johnson Asiedu Nketia stated that the advertising agency didn’t err as it realized that the Akufo Addo government since assuming power preaches one thing and does another.

“How on earth can anyone say the advertizer got it wrong with this billboard? It is a reflection of the deeds of the Akufo Addo administration…laws that are applied to prosecute criminals are for other people and does not apply to government appointees. That is the impression they’ve created and so if someone is dealing with government that is the way the person thinks. So if somebody has put up a billboard and the President is not wearing a mask, the person is thinking the President is exempt from wearing a mask and that it is for only members of the public.

Asiedu Nketia added: “Have you seen the President wearing a mask in any of the national addresses he’s made so far? Meanwhile, he advises Ghanaians to wear it always. When ex-President Rawlings was in power and he urged Ghanaians to desilt our gutters he himself got down into the gutters at Nima and desilted them. So President Akufo Addo must do what he preaches and the citizens will learn from him.”