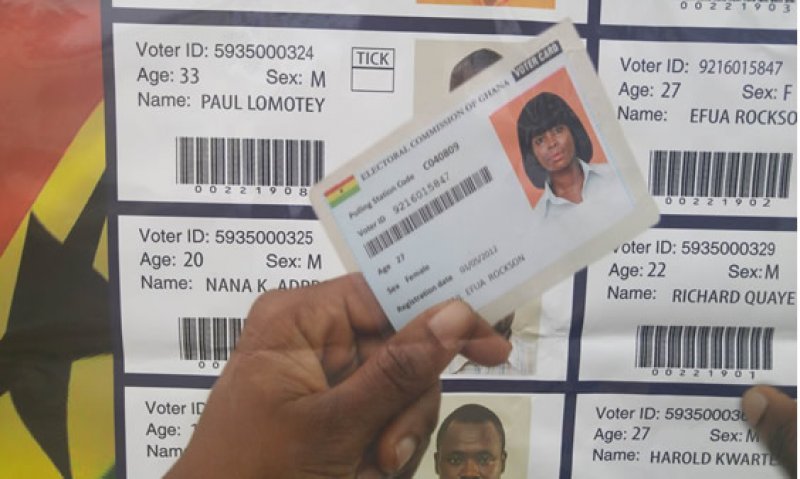 The recent allegations against the Jean Mensa and Dr. Bossman Asare-led Electoral Commission of Ghana and Ken Attafuah’s National Identification Authority is gaining basis and evidence. Even though the two state institutions deny the allegations, clear data from the NIA itself from the recent citizenship (Ghana Card) registration it carried out is seriously exposing the darkness behind the public deception game being played by the two bodies.

Available data indicate that if the country accepts the new regulation (C.I 126) being forced on the people by the EC and NIA, a total of an estimated registrable voter population of 1,118,472 from the Upper East and Upper West regions of Ghana alone will not have the chance to be registered as qualified voters even though they are qualified citizens. Out of an estimated registrable voter population of 1,187,975 in both regions combined, only 69,503 representing 5.85% of the population have been issued with the Ghana Card which one must have to enroll into the ECs proposed new register. The breakdown is as follows:
Out of a total registrable population of 772,931 in the Upper East region, only 49,156 people representing xxx% have access to the Ghana Card.

The Upper West region which have an estimated registrable population of 515,148, the NIA registered and issued same the Ghana Card to only 26,638.
Ghanaians are set to go to the polls in six months time to elect a new president and parliamentarians to constitute the next government and parliament of Ghana. The stakes are high and many pundits are predicting this year’s election will be the mother of all elections since Ghanas return to constitutional rule. Two great personalities will battle for the seat of government. Some security analysts even predict a possible violence if certain things are not put in order by our stakeholders involved. The uncompromising posture of the EC in its dealings with the major stakeholders as far as an election is concerned must be checked. The chairperson of the EC has reduced IPAC and other independent minds to empty and clueless dolls hence they do not have a stake in the elections. It is a trite fact that if confidence is lost, the credibility of the elections would be in doubt. Jean Mensa has stubbornly refused in collusion with some strange demons to see the potential danger her actions threaten the country with.

The paradigm of advocating for a new register has taken a different stance from the old tradition of political mantra and interest. This time round, it is the EC who is championing this process in tacit collusion with the trembling government of the day to disenfranchise citizens of this country in an attempt to conduct and supervise a very compromised and undemocratic elections to serve their personal interests. The Electoral Commission of Ghana sees no shame and sympathy for the vulnerable citizens who are likely to suffer, God forbid, in the unlikely event their actions drag the country into turmoil. In presenting the CI for amendments later known (C.I 126) to regulate the rigging plan they want to call elections, Jean Mensah is phenomenally attempting to re-write the history of Ghana and redefine the qualifications of a registrant and citizen into the planned new voter’s roll.

In direct confirmation of the well planned agenda to rig the elections per the conditions establishing her appointment into that office, the EC is saying that the birth certificate which was the primary document for the compilation of the 2012 voter’s register which got Nana Addo elected into office is no longer valid. It did not stop there, she ruled out driving licenses which uses the birth certificate again as the primary document in the processing and issuing of licenses to drivers who applied for it. She further went to rule out driving license as a requirement for registration of the planned new register. Baptismal card which was initially part of the requirements has also been expunged by the C.I by the EC. Scary as one may see it, she Jean Mensah has only stated the NIA card as the only proof of citizens require for this exercise, even when this same NIA used birth certificates, driving licenses, the voter’s ID card and passport in all the processes leading to the issuing of the NIA card to the lucky and privileged or their chosen ones since a whopping 61.41% of the entire population of Ghana have not been issued with their NIA cards.

The NIAs Ghana card exercise that was conducted in these 2 regions happened under unfavorable circumstances that left several people from these regions without the Ghana cards. Activities of the NIA in these areas were characterized by machine malfunction, very long queues, and unfair proof of citizenship to enroll. As many people in these two regions do not have birth certificates and passports to be able to qualify for the enrolment. The exercise carried out in these two regions was also rushed in few weeks unlike other regions perceived to be the strongholds of this NPP government, just to fulfil and excellently execute their planned agenda to disenfranchise patriotic citizens of this country coming from this part of the country. This grand scheme to rig this election must not be allowed to fester because it is evil. The people from these two regions would have to unite as we have always done in responding to this government to show how angry enough we are as a people and citizens of this our dear nation, Ghana.

One thing that must be emphasized here which my brothers and sisters from upper East and West must understand and fight for their rights is; citizenship is determined by the constitution and not by the EC. Let us fight to protect our citizenship. If the EC is bent on compiling a new register however needless it is, we must not be disenfranchised in their show of power which is transient. A word to the present generation is enough to save posterity!