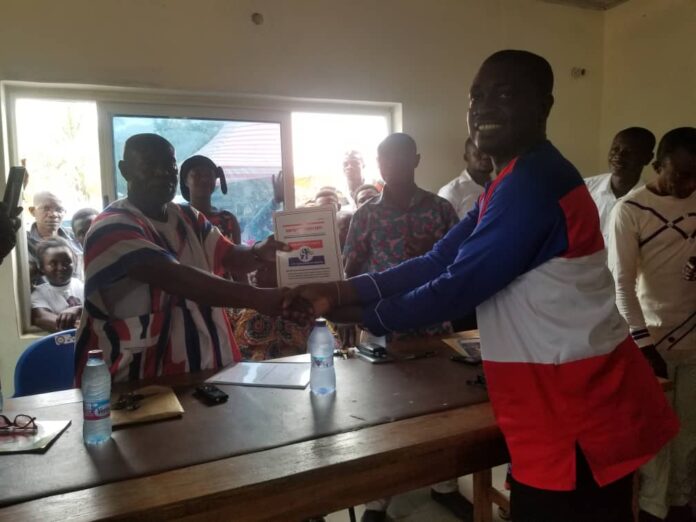 The Attorney General has advised the Ghana Police Service to drop the charge of abetment of crime against the New Patriotic Party(NPP) Parliamentary Candidate aspirant for Adansi Asokwa, Samuel Binfo Darkwa.

According to the Office of the AG, there’s not enough evidence to prosecute Mr. Binifo Darkwa on that charge.

This comes after the Adansi Asokwa Constituency Secretary of the NPP, Samuel Awui filed a suit against Mr Binfo Darkwa and some twelve (12) supporters of his for assault on him.

It will be recalled that there was chaos at the Adansi Asokwa party office when Mr. Binifo Darkwa tried to submit his nomination forms for the NPP Parliamentary primaries.

The secretary, Samuel Awui, was beaten by Mr. Darkwa’s followers after he allegedly declined to endorse the nomination forms of the MP aspirant when he received them at the party office.

Mr Awui who’s alleged to be against Mr. Binfo Darkwa’s candidature said he wanted to peruse the forms further at home before signing them. This led to anger among the aspirant’s supporters.

The Secretary per video evidence was physically assaulted by some supporters of Mr Binfo Darkwa. He subsequently filed a suit against Mr Darkwa and some of his supports.

But the Attorney General’s Office in an advice intercepted by Kasapafmonline.com urged the Fomena District Police Commander to drop the abetment of crime charges against the 3rd accused – Binfo Darkwa.

“The complainant stated in his witness statement to the Police that he believed that the assault on him by supporters of A3 was masterminded by A3, the Constituency Chairman and others. In as much as I empathize with the complainant, prosecution can only succeed in proving its case beyond reasonable doubt in court only when it adduces direct or indirect evidence to prove the guilt of an accused person. Mere suspicions and conjectures which are not backed by evidence would not suffice.

“I have not come across any evidence on record to support the allegation that A3 or anyone else for that matter promoted or encouraged or facilitated or aided the act of violence that took place.

“For the above-cited reasons, the abetment of crime charges against 3rd accused should be dropped. If a piece of new evidence which incriminates him for abeting the riot or any other charges later come up he would be charged accordingly. Until then however he should be discharged,” the AG advice stated in part.

“Your Police Fomena duplicate case docket RO. No. 21/2020 is hereby returned for your compliance with the above-mentioned directives.” 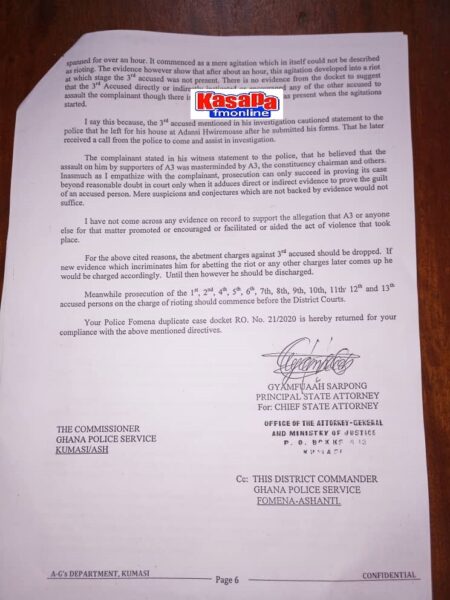