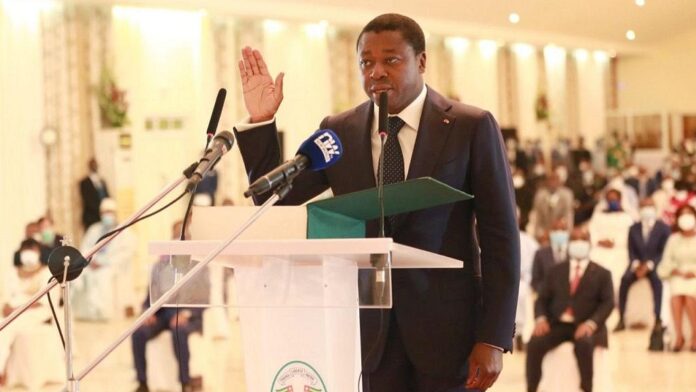 Togolese President Faure Gnassingbe was sworn into office over the weekend at a ceremony streamed on Facebook. The entire ceremony lasted an hour and 18 minutes.

It took place in a hall in the capital Lome with the Constitutional Court judges presided over the ceremony. The President of the court administered the oath of office to Gnassingbe – his fourth consecutive term.

His oath included amongst others a solemn pledge to respect and defend the constitution, to faithfully fulfill the high functions entrusted to him, to be guided only by the general interest and respect for the rights.

As well as to devote all efforts at promotion of development, the common good, peace and national unity; to preserve the integrity of the national territory; and to be a faithful and loyal servant of the people.

The president who remained unmasked throughout the ceremony was handed articles of the state including the national flag and the consitution by mostly masked officials. The judges were all masked.

In attendance were government officials and diplomats who were seated in strict observance of social distancing regulations in the wake of the COVID-19 pandemic.

Posted by Présidence de la République Togolaise on Sunday, May 3, 2020

The journey to a fourth straight term

Faure has been in charge of the country since 2005 when his father Eyadema died whiles in office. He had ruled for 38 years at the time.

Mass protests in 2017 – 2018 forced changes to be made to existing laws which allowed the president unlimited terms. But the new law whiles capping the terms to two of five years each did not take retrospective effect.

It means that barring any changes in the future, after the current tenure (2020 – 2025), the president will have the opportunity to seek a final reelection before leaving office in 2030. The February 22 presidential polls happened just in time before the disruption of life by COVID-19 pandemic.