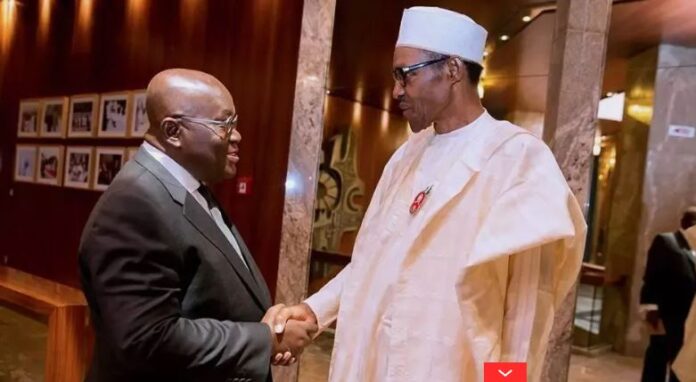 Ghana’s President Akufo-Addo has apologised to Nigeria’s President Muhammadu Buhari over the demolition of a building at the residence of the Nigerian High Commissioner in Accra.

The apology comes after the Nigerian community has strongly slammed Ghana and has picketed against the act which some say could possibly mar the cordial relationship that exists between the two countries.

Armed men on the night of Friday, June 19, 2020 supervised the demolition of the residential facility nearing completion on the premises of the High Commissioner.

Ghana’s Foreign Affairs Ministry has since condemned the act.

A statement released by the Nigerian Presidency disclosed that President Akufo-Addo, over a telephone conversation, apologised for the incident.

“Pres Nana Akufo-Addo of Ghana today spoke with Pres Buhari, expressing his sincere apology for demolition of a building on the premises of Nigerian High Commission in Accra, Ghana,” the Nigerian Presidency said in a tweet on June 23, 2020.

President Akufo-Addo further revealed that some suspects have been arrested in connection with the act and assured full investigations to ensure that the perpetrators are brought to book, the release signed by Senior Special Assistant to the President, Garba Shehu further added.

“Earlier in the day, it further emerged that some suspects had been arrested, and will be arraigned in court.” 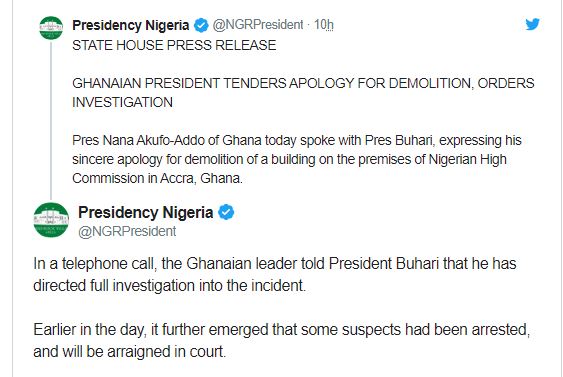 Tension between Rawlings and I ceased in 2012 – Akufo-Addo

Rawlings will have positive verdict in Ghana’s history – Akufo-Addo