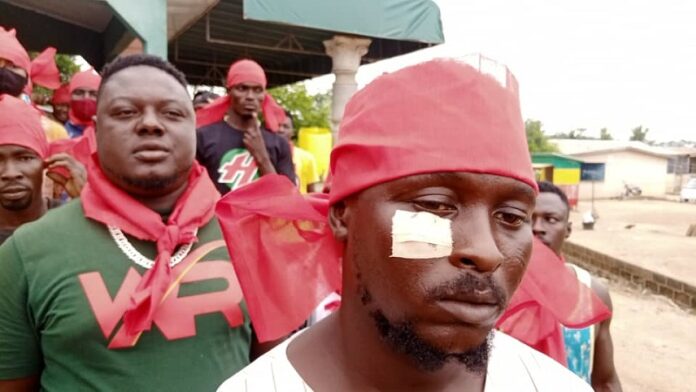 Two people have been injured after a group of people believed to be Landguards attacked members of Odupong Ofaakor “Asafo Company” 100 meters away from Ofaakor Circuit Court on a pending case over a missing dead body of Odupong Ofaakor Akyeamehen Kojo Amoashie III, three months ago.

It would be recalled that a group of people led by Lance Corporal Michael Larbie went to Ofaakor Chief palace and attacked chiefs and opinion leaders in front of the palace and stole the dead body of Akyeamehene Kojo Amoashie at the time they were performing rituals to bury him.

In the process over five persons were wounded through gunshots.

A team of Police officers from Police Headquarters and Kasoa Command managed to arrest over 10 people and were sent to court.

Meanwhile, Iddrisu Abdul, one of those injured said they are leaving in fear hence called on the authorities to come to their aid and beef up security in the area.