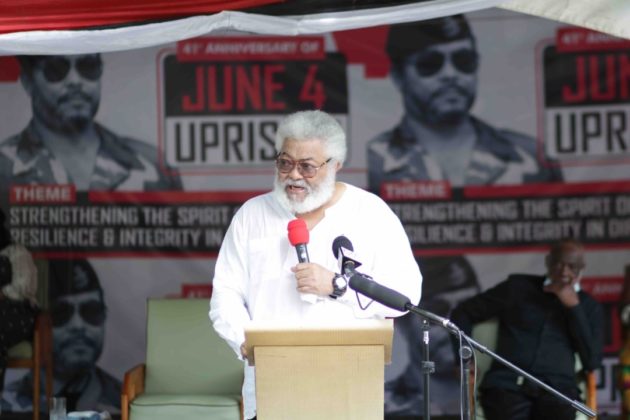 Ex-President Jerry John Rawlings has implored the Electoral Commission (EC) to adequately engage all stakeholders prior to the compilation of a new voter’s register for the upcoming December 7 general elections.

In an address at the 41st anniversary of the June 4 uprising in Accra on Thursday, the first President under the Fourth Republic said: “It is equally important for that revered institution, EC, to ensure that the processes leading to this year’s elections are done in consultation with the stakeholders of the nation; to prevent unnecessary suspicion, and promote a peaceful and cohesive society.”

The former Leader added: “An election is an event but, building a democratic, free and peaceful society is a process so the debate surrounding the new voter’s register must be thoroughly examined so we do not undermine the successes we have chalked so far, as a nation.”

Below is his full address:

ADDRESS BY H.E JERRY JOHN RAWLINGS AT A VIRTUAL DURBAR TO MARK THE 41ST ANNIVERSARY OF THE JUNE 4 UPRISING, THURSDAY JUNE, 4, 2020

Fellow country men and women, let me on your behalf say a big thank you to our soldiers and service personnel for the reward of the victory of that fateful June 4th. I thank you all not only for June 4th but for 31st December as well, which pre-empted a repetition of another even bloodier June 4th because people felt betrayed by the elite and political leadership.

I have chosen to speak less and rather allow the force of observation and the pain of circumstances to serve as a stimulus in awakening all of us from the deep sleep we have fallen into over the past decades.

We must be reminded that we are a country borne out of difficult situations where some had to toil and shed their blood. The positive disruptive force and energy of June 4th was not a product of any political movement or action. The spontaneous eruption on that fateful day represented the unadulterated spirit of liberation that was collectively sought after, as a nation at the brink of collapse.

Nothing more has signified or exemplified the patriotism and resilience of Ghanaians than in those difficult moments. Many were those who sacrificed their lives and livelihoods in order to bequeath to subsequent generations a more just society with equal opportunities for all, irrespective of their religion, tribe, ethnicity, political or educational status.

We must never forget our past nor erase the memories of where we came from. Commemorations like this allow us to ponder, reflect and re-examine ourselves – our conduct and policies and to see if these have properly been aligned to our core values of probity, accountability, integrity and social justice. The difficult times we faced in the past that propelled the engine of the revolution is almost parallel in hardship with the present era of Covid-19. But the question is, do we have the same mental fortitude and integrity that would enable us survive the circumstances of today’s trials?

History, it is often said, repeats itself whenever we refuse to learn most especially from adversities and volcanic and near bloody eruptions. We have many dedicated and learned men and women who could provide leadership at various levels to the benefit of this country. The very ordinary people in Ghana are not unwise about issues and developments in this country. We are, however, as a learned group unable to bring the best out of our people. The inability of our people to communicate with us in the administrative English language puts them at a disadvantage and makes them unable to demand accountability and transparency from us.

The spirituality and respect in the language of our culture evokes and demands integrity, accountability and transparency from us. This, however, does not and cannot happen because the foreign and colonial language has been used opportunistically to intimidate and promote falsehood and degrade the essence and substance of our being. Had we as a people carried our integrity and spirituality in our culture and language into the use of the administrative English language, a higher level of integrity would have been prevailing in Ghana and this continent and the quality of liberation would have enhanced our developmental efforts. The material and immaterial corruption in this country would not have undermined our ability and capabilities to the extent where the authority of truth would have been so badly undermined by the corrupted truth of authority.

In other words, the authority of truthfulness should not be undermined by the words or supposed truths of those in positions of power or authority. The morality and authority of truth is godly and divine and it should always supersede and override the truth of the authority of mortals. We have so mastered the art of untruth in our books, on our radios, on our televisions and now through the Internet so much so that historical truths and facts are struggling to be recognized. People are paid a lot of corrupt money to distort and lie about historical truths. Is it any wonder that the precious lessons we should be learning are invariably lost on us? And we end up committing the same blunders over and over. The royal families of France and Russia were executed for their corrupt and unaccountable leadership. The royal families who learnt their lessons from France and Russia embarked upon serious democratic reforms and that is why the royal family of England and other places in Europe have survived.

Instead of learning useful lessons from our not-too-distant past here in Ghana, some have made it their business to corrupt others to distort and wipe out our history. These people with selfish, myopic and wicked motives have consistently re-presented a one-sided story of a history that should serve as a guide for the future and ensure that we do not make the same mistakes that led to the eruptions of the past. Where have the distortions taken us? What has the failure to tell the truth done to us? Has it not brought us right back almost to where we started? We have rather belittled the national psyche. We could have been far richer, socially, culturally and economically, but for our negative desire to destroy the inspirational history that could have lifted us onto another pedestal.

When people shamelessly attempt to erase the truth, because they lack scruples, it rather perpetuates a state of corruption that derails all we have achieved while glorifying exploitation, perversion, dishonesty, immorality and criminality. I have countless examples of the evil actions of some of our elite in perpetuating their own depraved reality. More painful is the fact that while we expect some of these historical distortions to come from our natural opponents, some within our own political culture decided it was time to join the bandwagon and re-write the history that birthed our political culture.

Last year I spoke about how the intelligence machinery of the former Apartheid regime of South Africa used to pay treacherous characters in some of our countries. They served as spies and helped to spread malicious disinformation. Because the post-Apartheid leadership of South Africa has been silent about some of these traitors spread across the continent including Ghana, many of these characters are still doing some perfidious things. I urge the South Africans to expose these Apartheid collaborators, some of whom parade in their countries as patriots after performing some unconscionable and extremely repulsive acts.

Ladies and Gentlemen, early this year the world was struck by a pandemic whose effects eventually affected every facet of our lives. Despite the interventions from state institutions to alleviate the plight of the under-privileged there is still a lot to be done by all of us in our very own communities to support these groups of people.

The health force across the country some of whom have been infected with the virus, in the line of duty have taught us a sense of purpose, selflessness, commitment, dedication and patriotism. I commend all health workers as well as all other frontline workers for proving equal to the task in this defining moment of ours.

Fellow compatriots, we have hurt our own by institutionalizing corruption for far too long; giving a little few the access to amass wealth at the risk of the livelihood of the ordinary citizens who are languishing in poverty and misery.

National monuments, groups, events, institutions and important state assets are labelled after some deserving individuals to inspire and direct subsequent generations on the good path they must emulate namely: courage, the spirit of patriotism, resilience and integrity. In some instances, it serves as a crucial reminder for history’s defining moments. In Ghana, these actions that subtly influences us are sometimes taken for granted.

Unsurprisingly, some important roads in Accra have been named after undeserving personalities. Such actions are a spite on the Ghana Armed Forces and an affront to many. There are many distinguished African figures such as our own General Akuffo, Commodore Boakye, Admiral Amedume, Colonel Mensah Gbedemah, General Erskine, General Nunoo-Mensah, General Arnold Quainoo, Commodore Boakye, Brigadier Alphonse Kojo Kattah, Ayikwei Armah, Nigeria’s Wole Soyinka and Chinua Achebe and a couple more who merit such honour. In like manner, another administration desecrated the Kwame Nkrumah Mausoleum and rendered it a sheer family cemetery.

Ladies and gentlemen, our democracy is borne out of fire and we must dearly and compassionately protect its flames. One of the key institutional arms of this democratic discourse from pre-colonial to modern day Ghana is the protection of right and choice. We must endeavour as a nation to deepen the spirit of the consultative process, equity, respect for the rule of law or in simple terms, the tenet of democracy and multiparty democracy.

The Electoral Commission which is the fulcrum of our multiparty democracy must be supported and protected by all stakeholders; to ensure a free and fair election and a peaceful society.

That notwithstanding, it is equally important for that revered institution, EC, to ensure that the processes leading to this year’s elections are done in consultation with the stakeholders of the nation; to prevent unnecessary suspicion, and promote a peaceful and cohesive society. An election is an event but, building a democratic, free and peaceful society is a process so the debate surrounding the new voter’s register must be thoroughly examined so we do not undermine the successes we have chalked so far, as a nation.

In addition, the constitutional mandate of the Electoral Commission must be respected by all. While we work towards perfecting our electoral process, I urge you all to pursue and sustain our uniqueness as a country in the democratization process.

The sanctity of the right of choice is not a matter we can compromise with. That sanctity must be preserved at all cost and as we inch towards November let us ensure that the institutional processes are transparent and beyond blemish. Freedom and justice is not abstract. It is very much related to the sanctity of the right of choice. Those who are eligible to exercise that right of choice should not and cannot be disenfranchised by dictates that defeat one’s right to vote. The sanctity of justice should be preserved and protected with all of us being subject to the practice of what is just. An unjust society deepens the inequities that exist.

The patriotic zeal that gave birth to June 4 is one that cannot be extinguished. Any attempt to compromise on the ideals of probity, accountability and integrity in our everyday lives is an attempt to snuff out the light that was lit 41 years ago. Let us honour the memories of those who laid down their lives liberating Ghana.

Thank you and God bless you all.