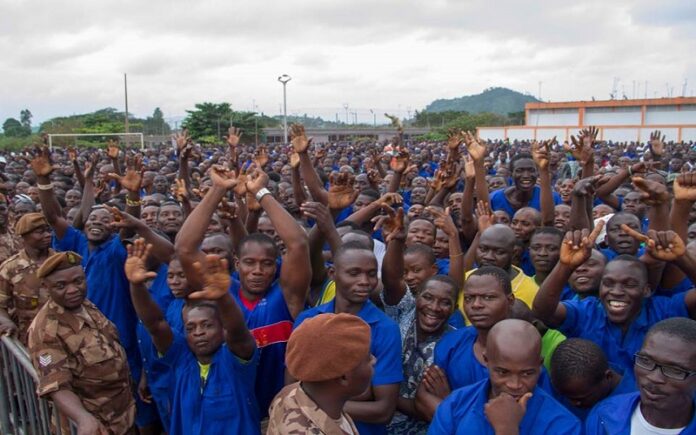 The facilitators of the Justice for All Program, POS Foundation are pushing for the release of non-violent drug users to be granted amnesty as a critical means to curtail the spread of COVID-19.

According to the foundation, although it acknowledges the government amnesty exercise in March this year where the President Nana Addo Dankwa Akufo-Addo released 808 prisoners across the country, persons convicted for minor offences and misdemeanors should be considered to ease congestion in the prisons.

Executive Director of POS Foundation, Jonathan Osei Owusu, argued that decongestion of prisons will help in effectively enforcing coronavirus protocols, adding that “POS Foundation and its partners together with its donor agencies are willing to support the state for non-violent convicted drug users to go through a period of rehabilitation and treatment within the pardon process period which is also in accordance with the new Narcotic Control Commission Law 2020 and international best practices as they pose no major threat to society to themselves.

He made this appeal at a training and orientation program on COVID-19 for inmates of the Nsawam Prison.

“The POS Foundation and stakeholders in the criminal justice sector further called on the President to increase the number by reviewing the amnesty criteria and propose the inclusion among others, persons convicted for drug use (not trade or traffickers) who are servicing below 10 years from the old PNDC Law 235.

According to him, “As stakeholders within the criminal justice sector and the state at large await the President to pardon more convicted persons in the mist if Covid-19 pandemic,  the POS Foundation and its partners together with its donor agencies are willing to support the state for non-violent convicted drug users to go through a period of rehabilitation and treatment within the pardon process period which is also in accordance with the new Narcotic Control Commission Law 2020 and international best practices as they pose no major threat to society to themselves.

The Executive Director disclosed that “The foundation together with its funding agencies (GIZ/German Corporation and Open Society Foundation/OSIWA) under the Covid-19 Response Prisons Outreach Project is donating Personal Protection Equipment  (PPE) to prisons across the country and supporting them with cotton materials for the production of about one million face masks (by prison Inmates tailor and seamstress) for the Prisons and families of the prison officers in support of the hard work by prison service towards the prevention of Covid-19 in prisons.

Donation to prisons across Ghana

Mr Owusu made who made the call during the commencement of a mass distribution exercise at the Nsawam Medium Security Prisons, said other prisons the Sunyani Central Prisons, the Kumasi Central Prisons, Tamale Central and the Navrongo Local Prison, the Koforidau and Akuse Prisons will all benefit from the exercise.

The items which include clothing, sanitizers, buckets, soap detergents and other worth GHc40, 000.

He said, however, that “an important sector of the Ghanaian economy that merits critical attention until a cure is found or the virus is eradicated from the system is the criminal justice sector particularly Ghana’s prisons.

‘The well-documented history of the transmission of infectious disease in prisons rings alarm bells for the threat of Covid-19 to prisoners and society at large.”

Touching on practices elsewhere to curtail the spread of the pandemic in the prisons, he said across countries, “Where the coronavirus has caused the greatest harm to human lives so far, prisons have been a substantial locus for its spread and present a focus for reform.

“In California, 381 people released from the Santa Rita jail, while Iran made history by temporarily releasing 54, 000 prisoners to contain the spread of COVID-19. Afghanistan, released 10, 000 prisoners made up mostly of women, young people, the critically ill, and inmates over the age of 55 on March 26, 2020. 4, 011 prisoners, all persons who had committed minor offences were granted pardon by the Ethiopian President in an effort to prevent the spread of covid-19,” he stated.

Meanwhile Deputy Superintendent of Prisons (DSP) and Public Relations Officer for the Nsawam Medium Security Prisons, Adamu Abdul Latif, while backing the calls for amnesty added that, aged with chronic related ailment should also be considered for Amnesty.

He commended POS Foundation and its associated partners for the support.