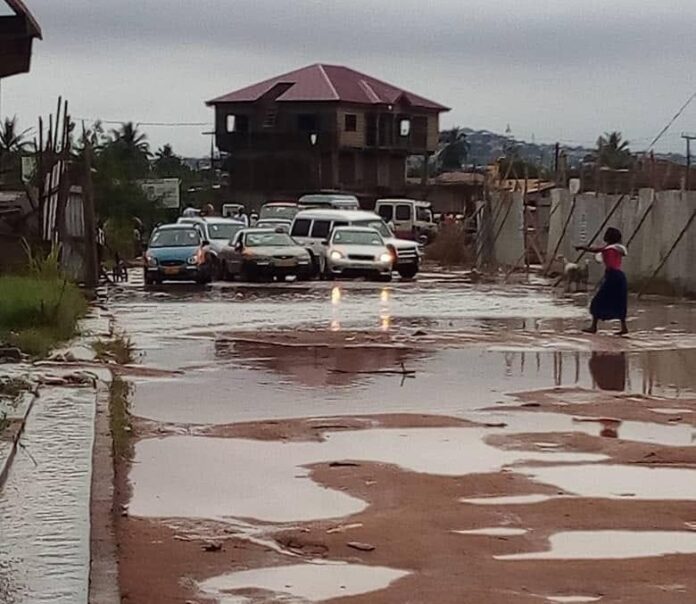 Though the Nana Akufo-Addo administration has tagged 2020 as a ‘Year of Roads,’ signifying a clear intent to embark on an aggressive road development across the country, residents in some eight communities in the Ga West Municipal Assembly (GWMA), in the Greater Accra Region, feel neglected in that package.

According to these communities, namely Manhean, Oduman, Afuaman, Peace Village, Ablekuma Abaase, Joman, Borkorborkor and Nsakina, all in the GWMA, the current administration has completely turned a blind eye to their deplorable roads.

Consequently, the youth in these areas have warned the Electoral Commission (EC) to forget about election 2020 if the central government fails this time around to have their roads fixed.

They stated that they were very disappointed in him, particularly when he had led a series of protests for the main roads linking these communities to be constructed even before he was elected the assembly member.

“Nii Bii Nii is a big disappointment. His conduct since he became the assembly member for the Manhean Electoral Area confirms that all politicians are the same — they only think of their stomachs and those of their immediate families. And instead of serving his constituents, he is rather lording it over them. He should be mindful that four years was just around the corner! A resident of Manhean, Ama Darkoa, angrily said.

The residents, motorists and commuters in the above communities have continued to lament the deplorable state of their roads, which causes them untold hardships everyday.

The inner roads of these areas, which serve as links to the main Ablekuma Curve-Afuaman, Ablekuma Curve-Joman and Obeyeye-Afuaman roads, are very bad and dangerous.

These Ablekuma Curve-Afuaman, Ablekuma Curve-Joman and Obeyeye-Afuaman main roads have become death traps waiting to wreak havoc on innocent residents who ply them.

From every corner of these communities come lamentations from residents and motorists over persistent vehicle damage and loss of man hours on the two main roads—Ablekuma Curve-Afuaman and Obeyeye-Afuaman roads.

And with the rains, the situation has been aggravated This year’s rains have rendered the two major roads connecting thousands of residents in these communities virtually impassable, with pregnant women especially bearing the harshest brunt.

According to the residents, if the rains continue in the coming days, these communities would eventually be cut off Accra, where most of the people go to irk a living.
They added that they would not be surprised if commercial vehicles decide not to ply the major roads in these communities.

Furthermore, motorists, especially commercial bus drivers and motorcyclists, have described particularly the state of the Abekuma Curve-Afuaman and Afuaman-Obeyeyie roads as nightmarish.

A resident in Manhean, Nii Akwando, complained that their roads had completely been neglected, causing loads of nightmares for users.

“For instance, the Manhean-Ablekuma Curve road linking the Pokuase-Awoshie road is not only bad but also a killer.”

“Many accidents on motorcycles happen on our road during the rainy seasons and we have cried out but the government has ignored us,” Edu Gyamfi, a resident in Afuaman, while commenting on the road, said.

He continued: “You can see the state of the roads within Oduman, Manhean, Peace Village, Afuaman among others. We don’t have good roads and that is why we often abandon our cars at home whenever we know that the communities we are visiting have impassable roads. And for those that are still motorable, one would have to master the locations of the potholes and other problems.”

The residents said they could not understand why they were being treated with neglect from the government.

The people described as manholes the countless terrible potholes on the main Ablekuma Curve-Afuaman road.

A commercial driver, Egya Mensah, who spoke with this reporter at Manhean, said Abelkuma Curve-Manhean road was not suitable for motorists.

“All communities that use this main road are forgotten communities. What I can say is that we are not part of the country called Ghana. If that is not the case, then why have successive governments, including the current one, not fixed our roads?” Egya Mensah angrily asked..

A resident of Ablekuma Abaase, Eric Obeng, complained that the roads within his area were in deplorable state, but added that: “the road from Ablekuma Curve to Afuaman especially is begging for attention.”

The body pains experienced by commuters and the damage to vehicles of all shapes and sizes caused by potholes on the Ablekuma Curve-Afuaman road had become unbearable, according to the residents.

And anytime passengers board commercial vehicles plying this road, the conversations have not shifted from the jerky nature of the road.

For private individuals who have their own cars, the best option under the prevailing circumstances has been to park their cars and join tro-tros (commercial buses) to their places of work.

Roads in the Ablekuma-Manhean enclave have become a subject of many demonstrations by residents who have constantly complained about the dangers the roads have posed to them over the years.