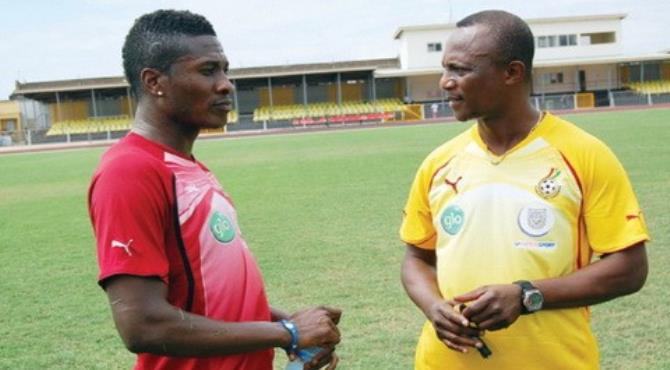 It is interesting and rare to get a player with three World Cups and several Africa Cup of Nations under his belt lacking maturity and not being focused.

But that seemed to be the situation Asamoah Gyan found himself or at least that is how Coach James Kwesi Appiah saw him when he made him the captain of the Black Stars according to Ex-Black Stars defender John Painstil.

In our African context, the traits that typically makeup maturity are only presumed to come with age and experience.

Most often than not, Coaches appoint players who can lead and control teammates both on and off the pitch and it is often one of the older/or more experienced members of the squad or a player that can heavily influence a game or has good leadership qualities.

In this case, former Black Stars Coach James Kwesi Appiah in 2013 saw that Asamoah Gyan had the capabilities to be the team’s captain but he was always acting immature so in order to get the best out of him he made him the captain of the team John Paintsil reveals.

Speaking on Dwidwamu Sports on Kasapa Fm, Paintsil revealed that when Kwesi Appiah decided to make Gyan the Captain of the Black Stars team ahead of South Africa 2013 Cup of Nations, Kwesi Appiah had a chat with him(Paintsil) to explain his reasons for making Gyan the skipper of the team since he was the most senior player at camp then.

“In 2013, when we were in camp Kenya preparing for the Africa Cup of Nations, Coach Kwesi Appiah told me that he wants to make Gyan the Captain and I asked was his reason for making him the Captain. Then he said he wanted to see more maturity from Gyan and he believes when he gives him the armband he will be more matured”, Paintsil told Adam Adjei on Kasapa FM’s Dwidwamu Sports.

Gyan became captain of the Black Stars team from 2013 to 2019 and was replaced by Andre Ayew.